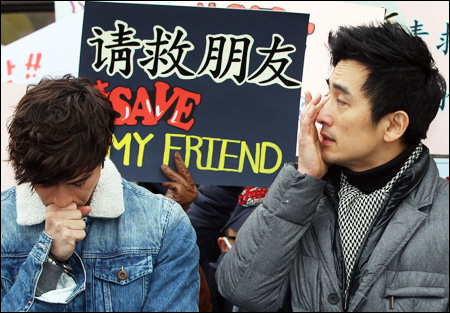 Actors Cha In-pyo, right, and Ricky Kim attend a rally outside the Chinese Embassy in Seoul Tuesday to call on Beijing to end its policy of repatriating North Korean refugees to their Stalinist homeland. / Yonhap

Having played the part of a North Korean defector on the big screen, actor Cha In-pyo is now raising his voice to press China to end its policy of repatriating refugees attempting to flee their Stalinist homeland.

Cha, the star of the 2008 film "Crossing", which highlighted hardships faced by defectors, held a press conference earlier this week with other entertainers amid concern over dozens of North Koreans whose repatriation by Beijing was feared imminent.

Working to save such people "is a matter conscience, not just diplomacy or ideology", Cha said, adding Beijing should "give the defectors the chance...to love and to live".

The case of the detainees, who have been held since early this month has garnered attention among a wide swath of society and the international community due to the North's reported harsh punishment of those who attempt to defect.

Beijing repatriates North Korean refugees under a deal made with Pyongyang, its ally. Human rights activists say those repatriated face harsh punishment including torture and imprisonment in labor camps.

The North Koreans were arrested in three groups, according to lawmaker Park Sun-young. Groups of nine and 10 were detained Feb. 8 and a group of five two days later, the lawmaker said.

The group of 10 was arrested by Chinese police at a bus terminal in the northeastern hinese city of Shenyang on Feb. 8. They had planned to travel to South Korea to unite with family members.

In the film, Crossing, Cha played the role of a North Korean father who crossed the border to buy medicine for his sick wife, only to learn of the grave dangers faced by refugees in China and hardships in the South.

Cha has become an advocate for the defector community, supporting the Yeomyung School for youth defectors in Seoul.

"Actor lends voice to save NK detainees"
by HanCinema is licensed under a Creative Commons Attribution-Share Alike 3.0 Unported License.
Based on a work from this source