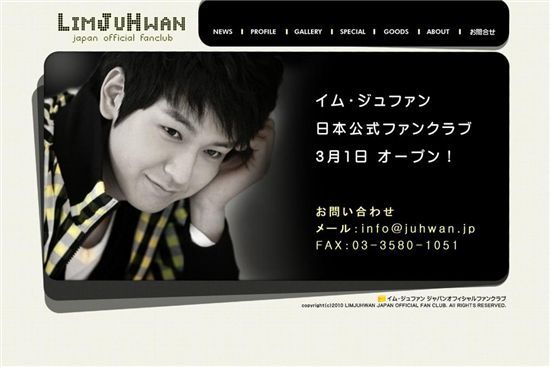 Korean actor Lim Joo-hwan's official Japanese website will open on March 1, according to his agency Yedang Entertainment on Friday.

"We opened the website (http://www.juhwan.jp) because Japanese fans had been requesting for up-to-date information on his activities", said an official from Yedang Entertainment.

Lim's fan base is Japan has been increasing since the airing of MBC drama "Tamra, the Island" in the country which was followed by a fan meeting late last year.

"I would like to thank my fans in Japan through my new webpage and it will give me a chance to become closer to them", the actor was quoted as saying.

Lim will star in a special two-episode MBC drama, scheduled to air on February 27 and 28, about an international couple getting married. It will also run on Japan's Fukoka-based broadcasting channel TNC on April 17 and 24.

The actor made his debut in 2004 with a role in the SBS TV series "Magic", and appeared in other Korean dramas such as KBS2's "The Snow Queen" and "Boys over Flowers". He was also in a couple of films including "A Frozen Flower", "Arang" and "A Millionaire's First Love".

"Actor Lim Joo-hwan to open official Japanese website"
by HanCinema is licensed under a Creative Commons Attribution-Share Alike 3.0 Unported License.
Based on a work from this source