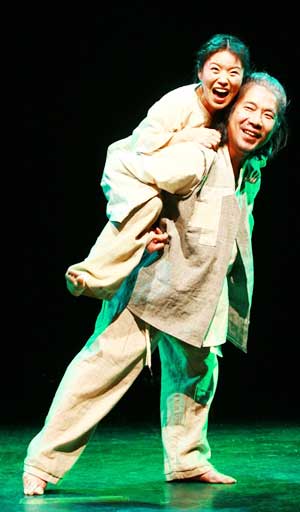 Often called a scene stealer in his major hit films, actor Oh Dal-soo is returning to the stage.

In the new play Oh will perform as an old father who is obsessed with his child and eventually sacrifices himself for his offspring through traditional Korean language, song and dance.

The play is based on the story of a blind child growing up in a goblin forest along with his father. The child dreams of leaving his father's arms for the new world but faces the tricks of goblins and must overcome obstacles to find his own way.

The story focuses on the process of how the child evades his father's obsession and control toward the outside world in a bizarre but humorous manner and fantasy-tinged scenes blurring dreams and reality and time and space.

Oh has starred in numerous successful films such as "Old Boy", "Mapado", "A Bittersweet Life", "The Host", "The Good, the Bad, the Weird" and most recently "Foxy Festival". His upcoming period piece "Detective K" opens in theaters Jan. 27.

But his rich experience in the theatrical arena as a seasoned actor and head of theater company Singiru Manhwagyeong (Mirage and Kaleidoscope) has made him shine further on the big screen.

Oh began his acting career in theater in Busan and has kept up his appearances in theatrical productions such as "Ogu" co-starring with veteran actress Kang Bu-ja even after gaining a strong reputation in the film arena.

The play is produced by Singiru Manhwagyeong and Eda Entertainment.

"Actor Oh Dal-soo to return to stage"
by HanCinema is licensed under a Creative Commons Attribution-Share Alike 3.0 Unported License.
Based on a work from this source