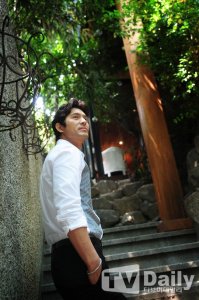 Actor Oh Ji-ho has admitted that a woman, who killed herself on Jan. 9 after breaking up with him, was his ex-girlfriend and that he truly loved her.

The 31-year-old actor confessed his feelings about his ex-girlfriend, a 28-year-old hostess who is identified only as Lim and worked at a bar, on the Internet homepage of his management agency on Tuesday. The woman strangled herself at her apartment in Socho-dong, southern Seoul.

Oh, who achieved stardom in his latest MBC drama, "Fantastic Couple", attracted public attention when a rumor over his relationship with the woman spread quickly after her death.

The Internet was swamped with suggestions that Oh was her former boyfriend.

But Oh denied it, saying that the rumor was groundless and he would take legal action against those spreading it. She had known Oh for slightly over a year.

Oh abruptly confessed the truth about his relationship with her on this homepage and said he actually loved her, but could not reveal her position because she was a bar hostess.

"I lost words because I was shocked by her death. I cannot believe she passed away and I just can't help shedding tears", he said on his homepage.

"I truly loved her. I didn't care where she worked. She suddenly left me and I regretted that I just let her go", he said.

He also said that he felt sorry about the recent media coverage of him and his ex-girlfriend. He said that the articles created rumors and misunderstandings about her and distorted her image just because of her job.

He said that as a celebrity, he couldn't make their love public, as he was too afraid of public attention.

But her friends and bereaved families insisted that Oh dumped her on Jan. 3 seriously hurting her and driving her to kill herself on Jan. 9.

Oh won huge popularity by starring in the hit romantic soap opera, "Fantastic Couple" on MBC with actress Han Ye-seul and a new gangster comedy film, "My Wife is a Gangster 3", after being almost unknown in the seven years since he began his career.