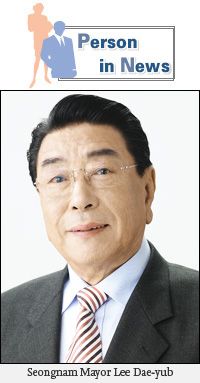 Seongnam Mayor Lee Dae-yub was an action movie star in the 1960s and 70s, famous for his black leather gloves with which he used to batter evildoers.

Now the mayor of Seongnam, which includes Bundang, a wealthy "bedroom suburb" community on the outskirts of Seoul, he is changing roles. According to an informal poll conducted by MBC asking residents about his latest project - the 320-billion-won City Hall building - he is unmistakably an antagonist who profusely spends taxpayers' money.

"This is not something I am going to take with me. This is for all citizens", Lee said during a tour of his city administration building last week. He emphasized that the building was the "Face" of the city and worth every penny.

"When we go abroad, we visit city halls. We have built it, looking some 100 years into the future", he said.

Seongnam is a satellite town of the Seoul Metropolitan area located south of the capital. The city has a population of 950,000.

The floor space of the hall is about 74,000 square meters, three times more than that of the Central Government Complex in Sejongno, Seoul.

Modeled after a stealth jet, it houses the city government, offices for 35 city council members and other facilities for civilians. It is decorated with imported marble, and escalators connect the first and third floors, features rarely seen in other cities, including Seoul.

The mayor's chamber, located on the top floor, is at the core of the criticism. The total area of the chamber is 282 square meters, including the secretary's room.

It is more than twice as large as the average floor space of mayors' offices throughout Korea.

The city insists that, though it is large, it is not a luxury for the mayor but to provide better civic service to citizens who visit the mayor. "We brought office fixtures from the old city hall", a city official said.

Usually, municipal governments put the mayor's room on a lower floor to promote easy access for citizens. "Mayor Lee's room is located on the top floor, which shows that Lee looks down upon the citizens", said Hwang Sung-hyun, a civic activist with the People's Solidarity for Participatory Democracy.

Seongnam's excessive investment is also interpreted as Lee's attempt to become the dominant locality in case a merger of Seongnam, Hanam and Gwangju takes place. The three cities were chosen for a merger, according to the Ministry of Public Administration and Security in November.

Not satisfied with being an actor, he turned to politics in the 1980s. He was elected to the National Assembly in 1981. He served three consecutive terms there until 1992. In 2002, he was elected as the third mayor of Seongnam and reelected in 2006.