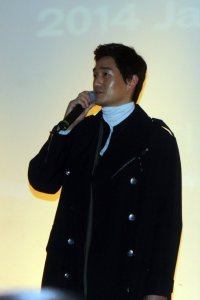 Actor Yoo Ji-tae, 34, will receive the Seoul Women's Prize along with five others today at City Hall, according to the Seoul Metropolitan Government Sunday.

The grand prize will be given to Song Yong-sun, 88, the director of the Korea Women's Association, for her dedication in bringing women to actively participate in social issues and fighting for women's rights over the last 40 years.

Yoo, who is the first male winner, will receive the honor for participating as a member of the "100 Supporters", a support group that helps women suffering from domestic violence.

"I realized that emotional pain could be much greater and more serious than physical pain. The fact that violence can be transmitted from generation to generation breaks my heart", he said about his support of the group.

Attorney Lee Myung-suk will also receive an award for her efforts in revising laws and working on various cases regarding women's issues.

Other winners are Kim Mi-gyeong, the CEO of consulting group W-Insights, for her dedication in lifting women's social status within society; housewife Lee Young-ja, who has been financially supporting underprivileged children; and Hwang Eun-suk, the head of the Single Parent Family Institute of Korea, who helps single parent families through counseling and financial support.

The Seoul Women's Prize was created in 2004 to award citizens who have dedicated their time and efforts for the well-being and happiness of women and society as a whole.

"Actor Yoo to Receive Seoul Women's Prize"
by HanCinema is licensed under a Creative Commons Attribution-Share Alike 3.0 Unported License.
Based on a work from this source