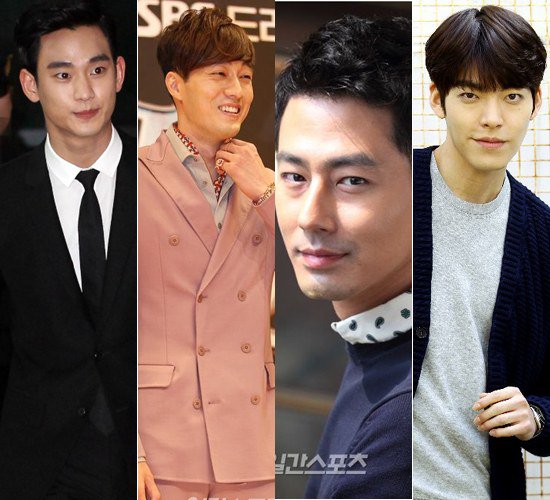 Curiosity rose for actors' pay after actresses' pay was released last month. We've updated the ranks from highest paid actors to the lowest.

According to studies, the gap between actors and actresses isn't that large. In case of the actors, they are more highly paid as they have a strong fan base all over the world. The prices of actors continuously rise but the actresses fill in the gaps with fashion and beauty advertisements. After actors make it big with dramas, they make more money off extracurricular events such as foreign fan meetings and such so they make extra profits.

Kim Soo-hyun is the hottest actor no matter what these days. Everything he stars in has become a hit and he's creating history. He is on top of the list for casting and writers are even writing scenarios with him in mind to begin with. He was paid highest in "My Love from the Star". However, in "Producers" he didn't ask for more out of loyalty to writer Park Ji-eun.

Hyun Bin who came back with a drama after his military service is also a highly paid actor although his most recent work failed. He joined the Marines after "Secret Garden" and returned with "Hyde, Jekyll and I". He's known to have been paid 100 million won per episode with bonuses during this time.

Other top class actors are just about the same. Things don't change just because someone wasn't successful or successful. It all depends on how famous you are in the Hallyu world.

So Ji-sub starred in "Ghost - Drama" 2 years ago and was paid 80 million won per episode during "Master's Sun". He gets paid as much because he has his own color and pulls off every character to the best of his abilities.

The same goes for Jo In-sung. He was paid the highest during "That Winter, the Wind Blows". Song Joong-ki from "Descendants of the Sun" was also paid a lot for his upright image and good looks.

Kim Woo-bin, Lee Min-ho, Lee Jong-suk, Joo Won and Ji Chang-wook get paid according to their wishes. Agents want them on their team even if that means they have to pay them a blank cheque. Not only are they popular in Korea but other countries like China as well so they might have a few more '0's added to their paychecks.

However, they can't avoid the fact that they are going to have to pay their service to the country soon. They have to go within the next three years so they have a lot of work to do in expanding their identities.

Idols still have a long way to go

Idol stars appear every now and then in dramas but they don't get treated well. Park Hyung-sik from "The Heirs" only gets paid about 10 million per episode. Yook Sung-jae and Lee Joon are at about that line too. Why don't they get paid as much as their reputation? Apparently, if they can't lead the drama on their own like Suzy, then they won't get paid as much. Even the artists themselves don't ask for more as they have another job as singers. 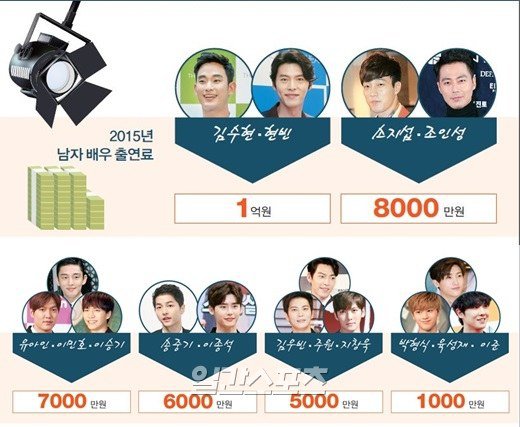 "Actors' salary this year"
by HanCinema is licensed under a Creative Commons Attribution-Share Alike 3.0 Unported License.
Based on a work from this source