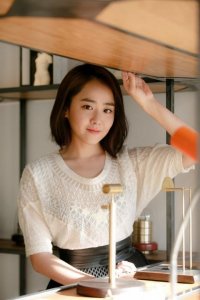 Actress Moon Geun-young will stop filming scenes for the SBS drama "Painter of the Wind" for one week, after she fractured her nose last week.

Moon sustained the injury while filming an argument scene with actor Park Shin-yang, Oct. 9 at the Korea Folk Village, Yongin. Park accidentally hit Moon on the nose with his elbow, and the actress had to be rushed to the emergency room for immediate treatment.

In a press release, SBS Drama said X-ray results showed a slight fracture of her nose. Doctors have advised Moon to rest for a week, so she stopped filming the drama temporarily.

Moon is starring in the drama as legendary artist Shin Yun-bok, who lives as a man to figure out the mysterious death of her family during the Joseon Kingdom (1392-1910). She earlier suffered minor injuries on the set when she fell into a well.

Park was quoted as saying he was worried about the Moon's health, and wishes her a speedy recovery.

SBS will air re-runs of "Painter of the Wind" this week. New episodes of the drama will be aired next week.

"Actress Breaks Nose, Falls Into Well"
by HanCinema is licensed under a Creative Commons Attribution-Share Alike 3.0 Unported License.
Based on a work from this source