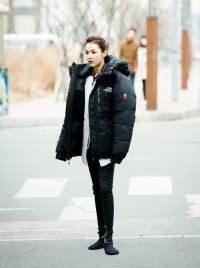 At first glance, it is hard to describe actress Kang Hye-jung's mysterious charms. When you go through her films, it may be even be harder.

But when you take a careful look, you realize that she has both the girl and the woman in her face. It is a characteristic that is distinctively her own and one that has allowed the 23-year-old actress to explore a range of characters in her comparatively short acting career.

Her characters range from a teenage girl to a 29-year-old woman. She plays a budding young woman in the mega-hit "Old Boy" (2003), an innocent and naïve girl in "Welcome to Dongmakgol" (2005) and she took on the role of a woman who lived a life full of inner pain in "Rules of Dating" (2005).

So it may not be so surprising to learn that her next role is that of a 20-year-old woman with the intelligence of a seven-year-old girl in the new film "Herb".

But Kang, who seems to have enjoyed challenging herself to play bold and convincing characters, said it was not an easy task from the very beginning.

"Before shooting, I didn't know what to do at all. And I felt guilty thinking that I might take advantage of them (mentally retarded men) for my own sake", Kang said Tuesday during a news conference followed by a preview screening of "Herb" at the Megabox theater in Sinchon, Seoul.

"But Bae Jong-ok (veteran actress who plays the mother of Kang's character in the film) told me it would be fine if it could mean something for them, which helped me a lot, and I was able to shoot the film", Kang said.

Directed by Heo In-moo, the film revolves around Sang-eun, a 20-year-old mentally retarded woman. The film looks at how she communicates with the world and learns about it through the relationships with her mother and a man who she falls in love with.

Kang made her debut in show business as cover model of a teen magazine in 1997, and appeared in the television drama "Eunsili" in 1998, as a bad teenage girl who is always harsh on the main female character.

Although many think that Kang's challenging adventure began with her role in "Old Boy" in which she played Mi-do. She took her most adventurous role in her first film.

Her film debut is the experimental short film "Flush" 2001 by director Song Il-gon. In the movie, she played a teenager, who gave birth to a baby in a toilet.

One of her most interesting accomplishments is this year's melodrama "Love Phobia" (Tomabaem), in which she co-starred with her real life boyfriend Cho Seung-woo.

Although most celebrity couples avoid having their relationship in the media spotlight, Kang said she was able to learn a lot from her boyfriend while working with him. (Jo played a mentally retarded man in the 2004 hit movie "Marathon".)

What makes Kang continually challenge herself in her movies?

"I don't have any preference for specific characters or works. If I read a script and it makes me curious, I decide to star in it", Kang said.

"When I read the script of `Herb', I found it lovely and felt my heart warming. I like it because the story deals with reality without beautifying it. I hope the audience will feel the same way", Kang said.

"Actress Challenges Herself Again"
by HanCinema is licensed under a Creative Commons Attribution-Share Alike 3.0 Unported License.
Based on a work from this source