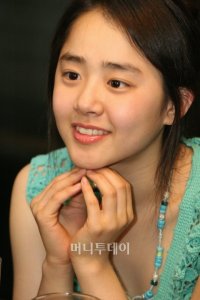 The 20-year-old gave 4.3 million won in 2005, 4 million won in 2006 and 70 million won last year. The popular star of TV drama "Autumn in my Heart" made the contributions secretly through her mother, Ryu Seon-young, but her good deeds became known when Morning Reading revealed its 2007 account information online.

Founded in 2005, Morning Reading encourages elementary, middle and high school students to read books. Moon became acquainted with the organization when Ryu first bequeathed 1 million won, and has since helped whenever there were budget constraints, said the organization, according to Yonhap News.

"When we first received the gift, we thought it was a mistake because it was too much. Later Ryu introduced herself as a librarian at the national library", Han Sang-su, head of Morning Reading, was quoted as saying. "Moon's help was critical to our development".

Moon is affectionately called "the nation's little sister" and has appeared in popular movies like "My Little Bride". She is also known for continuously supporting other causes such as library-building and helping disadvantaged students in small villages, as well as promoting scholarship programs and securing funds for those with terminal diseases.

"Actress Donates Money to Promote Book Reading"
by HanCinema is licensed under a Creative Commons Attribution-Share Alike 3.0 Unported License.
Based on a work from this source