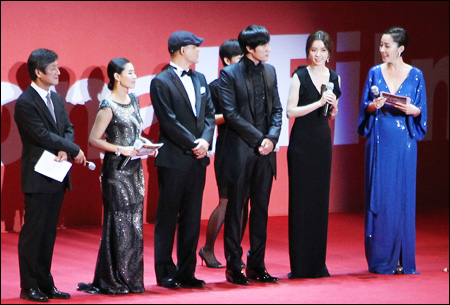 Not only does the festival assume a new name, with the outdated Romanization "Pusan" changed to "Busan" ― but this year's event will be the first to be headed by Lee Yong-kwan after founding director Kim Dong-ho stepped down. Both men took part in the event, alongside Busan Mayor and festival chairman Hur Nam-sik.

Moreover, for the first time in its history the festival saw two actresses, rather than one male and one female duo, host the opening event.

"It is an honor that we, the two Ji-wons (Ye Ji-won and Uhm Ji-won), are announcing the start of this esteemed festival", said Eom. Ye agreed, saying, "It's a great honor to be here tonight".

Both actresses have been regular guests at BIFF. Eom rose to fame by pulling off the tough Busan dialect in Kwak Gyeong-taek's "Mutt Boy", and has gone on to star in a variety of films such as "The Scarlet Letter" and "Scout". 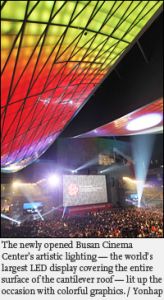 the 2008 edition of the festival with actor Cho Jae-hyun. This year's Midnight Passion section features "The Kick", co-starring Jo and Ye. Im Kwon-taek's "Hanji" also stars Ye and has been invited to show in the festival this year.

The two women seemed to fill in for the other's shortcomings, with Eom reminding Ye that they must host the event whenever she strayed off on a tangent, evoking laughter from the crowd.

Eom appeared chic in a dramatically cut glittery blue gown. As much as festival events become a celebrity fashion showcase, she complimented her co-host Ye, who opted for a shimmery black and gray, power-shouldered number.

While the opening event annually provides red carpet photo ops for chic young stars, this year's edition saw the appearance of veteran actors. Kim Hee-ra, who most recently appeared in Lee Chang-dong's Cannes-winning film "Poetry", graced the event in "hanbok" or traditional Korean attire. Kim Kee-duk, the 1960s filmmaker that is getting a retrospective section, made an appearance along with his contemporaries, prolific auteur Im Kwon-taek and director Chung Chang-hwa.

International stars meanwhile had waves of camera flashes trailing after them: French film icon Isabelle Huppert appeared in a red dress while Chinese screen star Fan Bingbing appeared with her "My Way" co-star, Japanese heartthrob Joe Odagiri, who pulled off a stylish disheveled look. Fan in particular walked the red carpet twice to appear with the makers of kwak Jae-Yong's "Yang Gui Fei".
Meanwhile, Tsui Hark, the iconic Hong Kong filmmaker, stepped onstage to accept the Asian Filmmaker of the Year award. "It's a great honor to accept this award and I'm very, very excited... to share this honor with my friends and colleagues that supported me all these years", he said.

Yonfan, another esteemed auteur from Hong Kong, also took part in the event as the jury head of the New Currents section. "For the past 15 years the Busan International Film Festival has been for the young talented filmmakers, and it's a great honor to support young talent", he said about judging films by up-and-coming filmmakers.

Gilian Armstrong, the Australian director who is overseeing the jury of the Flash Forward competition, remarked on the festival's new exclusive venue. "I'm very, very jealous of (the Busan Cinema Center); I want to take this home for the Sydney Film Festival".

Minimal fireworks were employed to highlight the festivity for the recently opened Busan Cinema Center's artistic lighting ― the world's largest LED display covering the entire surface of the cantilever roof ― lit up the occasion with colorful graphics. The new venue provided for a dramatically different atmosphere from past editions.

Swarms of fans that gathered around the Busan Cinema Center reacted wildly for the arrival of superstars including actor Jang Dong-gun, who is taking part in the festival to promote Kang Je-gyu's "My Way"; So Ji-sub, the hero of this year's opening film, "Always"; model-turned-actor Cha Seung-won; and Kim Dong-wan, who debuted as a member of K-pop group Shinhwa and recently forayed into acting.

Popular actresses on the other hand stole the limelight by presenting colorful looks, from Oh In-hye's shockingly revealing red gown to Kang Hye-jung's mannish tuxedo and Ku Hye-sun's simple beige office look, which she seemed to opt for as she is taking part in the festival as a director rather than actress.

"Actress duo hosts open new chapter for BIFF"
by HanCinema is licensed under a Creative Commons Attribution-Share Alike 3.0 Unported License.
Based on a work from this source