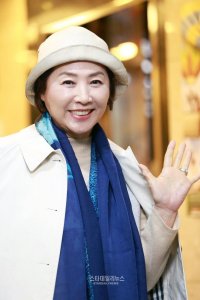 It is Ko's first theater appearance in seven years after performing in the monodrama "I, I'm a Woman" in 2000.

Based on an essay of the same title, "Mother" tells the story of a love-hate relationship between a mother and her daughter.

Ko will play a dedicated mother who makes many sacrifices for her family, especially her daughter, said major sponsor CJ Entertainment in a statement.

Jang Young-nam, who appeared in last year's popular play "The Vagina Monologues", will play the role of the daughter.

The company has not disclosed which theater will be used.

"Actress Go Doo-shim returns to stage"
by HanCinema is licensed under a Creative Commons Attribution-Share Alike 3.0 Unported License.
Based on a work from this source