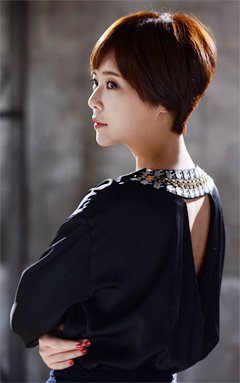 Actress Hwang Jung-eum seems to be in her element in "Incarnation of Money", having received high praise for her role in the drama about a fat woman transformed by whole-body plastic surgery.

In early episodes, the actress had to pad her face with silicon and scarf down food in front of the camera. But she wasn't fazed.

"I'm not afraid of looking ugly", she said. "Personally, I'm more at ease with a light character than a serious one".

Hwang made her debut as a member of the girl group Sugar and took up acting in 2005. Her popularity as an actress blossomed when she played a cheerful role in the highly successful sitcom "High Kick Through The Roof" in 2009 but after that she has mostly taken on serious characters in dramas such as "Giant", and "Golden Time".

"For some time, people were keep saying that I could only do sitcoms", Hwang recalled. "So I wanted to prove them wrong. I feel like I learned a lot from veteran actors whom I met through "Giant" and "Golden Time"."

And indeed, her efforts seem to be paying off as Hwang said she has received her first praise for her acting skills in eight years.

"Through thick and thin, I tried very hard. Harsh online comments about my poor acting skills pushed me to practice harder", she said. "I think there is still a long way to go before I can confidently call myself an actress, but I'm sure I'm on my way there".

"Actress Hwang Jung-eum Isn't Afraid of Criticism"
by HanCinema is licensed under a Creative Commons Attribution-Share Alike 3.0 Unported License.
Based on a work from this source