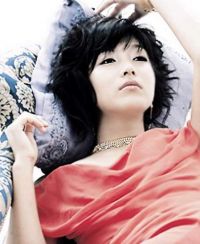 Jang, 35, has been hospitalized in Seoul since her condition recently worsened. Doctors have been reportedly giving her morphine and other drugs to relieve the pain.

Yedang Entertainment, her agency, said she died at 4:04 p.m.

Jang was diagnosed with stomach cancer last September after having a health checkup to treat a simple stomach ulcer. She immediately stopped working and has since been fighting the disease.

Her deteriorating condition came as a surprise, as there had been reports she was getting better. Most recently, however, her condition went from bad to worse.

The actress is best known for her role in "The Scent of Love" as a woman dying of stomach cancer.

She began her career as a model and participated in the 1993 Miss Korea beauty contest before making the switch to acting. Since making her film debut in 1998, Jang has received critical praise and won a number of awards for her work.

"Actress Jang Dies at 35"
by HanCinema is licensed under a Creative Commons Attribution-Share Alike 3.0 Unported License.
Based on a work from this source