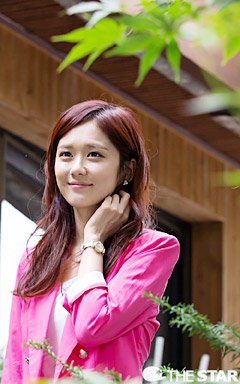 Actress Jang Nara has once again shown that she is still popular with her latest TV series "Fated to Love You", which ended on Sept. 4.

The soap was about an ordinary woman who accidentally married a perfect man from a rich noble family. She goes through a roller coaster ride of emotions, but eventually realizes he is her true love.

The character in her latest drama seemed little different from previous roles she had played in her other hits, such as "The Successful Story Of A Bright Girl" and "Babyfaced Beauty". All of the characters overcame all odds to find true happiness in life.

Though it was too typical and seemingly old-fashioned, Jang still succeeded in winning over viewers, and that is because she has an ability to bring something special to each role she plays.

Many actors feel they have to change when they play similar roles, but Jang has never thought like this. She thinks if actors change their style they can lose their strengths.

"I felt pressured and confused in my early 20s because people said I got pigeonholed even though I just debuted and appeared in a few dramas", Jang said. "Now I am relaxed, I know I will keep acting, and time will tell what I've achieved".

Jang said that she still has many strings to add to her bow even after a 13-year career in show business. She will continue to show them one by one in her future projects, and in the meantime she wants to take up challenges afforded to her by being single.