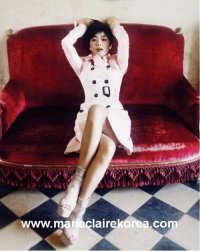 Jeon Do-yeon, one of the most popular actresses on the Korean film scene, wedded a businessman nine years her senior in a private ceremony at Shilla Hotel in Seoul on Sunday.

The couple, who met last November through a mutual friend, tied the knot with the blessings from about 100 closest family members and relatives. Among Jeon's celebrity friends, only actor Lee Se-chang attended the tightly controlled ceremony.

Jeon, 34, had reportedly wanted the wedding ceremony be a private affair. Her husband, Kang Si-gyu, 43, is a wealthy company executive who earned an MBA from George Washington University in the United States, according to reports.

The newly weds will head to the United States for a ten-day honeymoon, and settle in upscale Chongdam-dong in southern Seoul.

"Actress Jeon Marries"
by HanCinema is licensed under a Creative Commons Attribution-Share Alike 3.0 Unported License.
Based on a work from this source