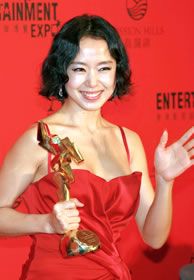 "Secret Sunshine", which is about a young widow moving to her late husband's hometown, beat other Asian films such as the controversial thriller "Lust, Caution", Hong Kong's "The Sun Also Rises" and Japan's "I Just Didn't Do It".

Hong Kong actor Tony Leung Chiu-wai won the best actor award for his role as a collaborator in "Lust, Caution". He bested Korean actor Song Kang-ho, who was nominated for his role in "Secret Sunshine", as well as Chinese action star Jet Li and Japanese actors Joe Odagiri and Ryo Kase.

There were several Koreans nominated in various categories at the Asian Film Awards. Actor Chun Ho-jin was nominated as best supporting actor for his role in "Skeletons in the Closet" ("Shim's Family").

Im Sang-soo was nominated as best screenwriter for "The Old Garden", while Shim Hyung-rae was nominated for best visual effects for his work in the blockbuster "D-War".

Kim Yu-jeong and Lee Min-bok were nominated for best production design for "Epitaph" (Gidam), and Lee Eun-soo was nominated as best editor for "The Old Garden".

The Asian Film Awards, started in 2007 by the Hong Kong International Film Festival Society, is aimed at honoring the finest of Asian cinema, filmmakers and artists.

"Actress Jeon Picks Another Top Award"
by HanCinema is licensed under a Creative Commons Attribution-Share Alike 3.0 Unported License.
Based on a work from this source