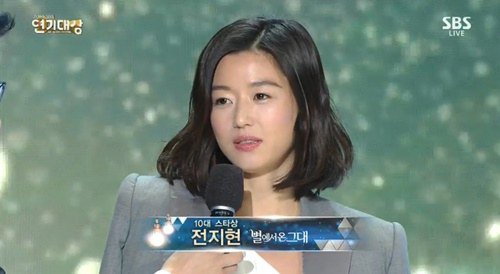 Park Yoo-chun said during his acceptance speech jokingly, "I thought this was an award that is given to a teen actor because of the name", which made the crowd laugh.

Jun Ji-hyun, who came up to the stage later, said sincerely accepting her award, "There were not many teenagers who could recognize me previously because I mainly appeared in movies. I am so happy to receive this award this time". Lee Hwi-jae, who was the host for the ceremony, corrected her saying "The name of this award is because there are 10 awardees, not because the winners are selected by teenagers". Jun Ji-hyun looked a little puzzled at first but burst into laughter covering her face.