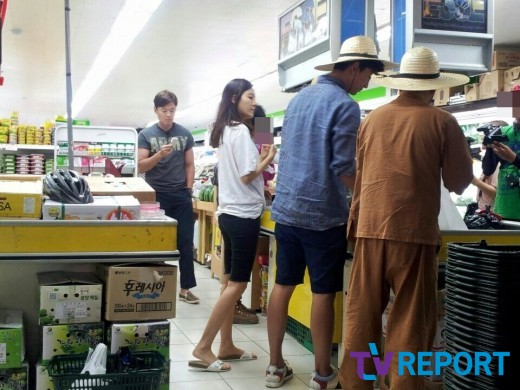 Actress Kim Ha-neul was spotted while she was filming tvN's reality show, tvN's 'Three Meals A Day' in Jeongseon, Kangwon-do.

Kim Ha-neul went to Jeongseon on June 22nd in order to participate in filming tvN's 'Three Meals A Day'. She is the fifth guest of the show this season, following after Park Shin-hye, Ji Sung, BoA.

According to the exclusive photo captured by TV Report, Kim Ha-neul is doing a grocery shopping along with Lee Seo-jin, Ok Taecyeon, and Kim Kwang-kyu. The photos show how much the cast of the show love grocery stores.

Producer Na Yeong-seok said during a press conference, "They are addicted to the downtown of the village. I can't do anything about it for now. Within only a few episodes since the season started, I cannot remember how many times they went out to buy ice cream. They are still visiting the downtown so much". To match producer Na's concerns, the photo shows Lee Seo-jin enjoying his ice cream.

Various stars have revealed their unexpected appeals in the show so far. Viewers now are anticipating on Kim Ha-neul's hidden appeals that the next episode of the show will bring out. 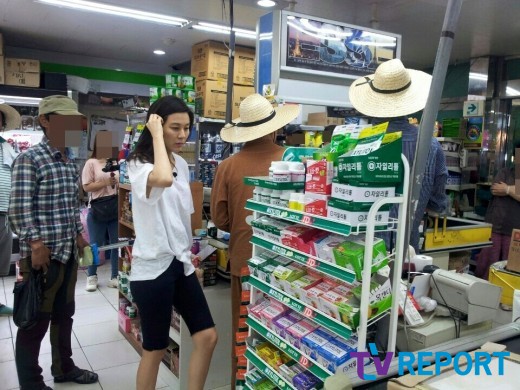 "Actress Kim Ha-neul spotted in the middle of filming 'Three Meals A Day'"
by HanCinema is licensed under a Creative Commons Attribution-Share Alike 3.0 Unported License.
Based on a work from this source