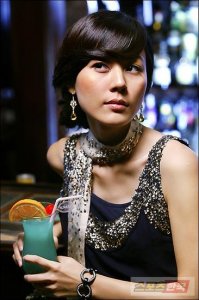 Actress Kim Ha-neul will work with singer Cho Sung-mo for the first time in 11 years. Yedang Entertainment, her agency, said Wednesday that Kim is to shoot a music video for Cho's new song "I Was Happy" on Friday.

In 1998, Kim, who had then just started her acting career, appeared in the music video for the singer's debut song "To Heaven" along with star Lee Byung-hun. And she succeeded in making her name known through it.

"It makes me remember my old days. It will be fun", she said. "I will give my best like I did when I debuted so that I can contribute to its success".

Kim will release her new film "My Wife is an Agent" on April 23 and take part in Korea-Japan co-production drama "Paradise".