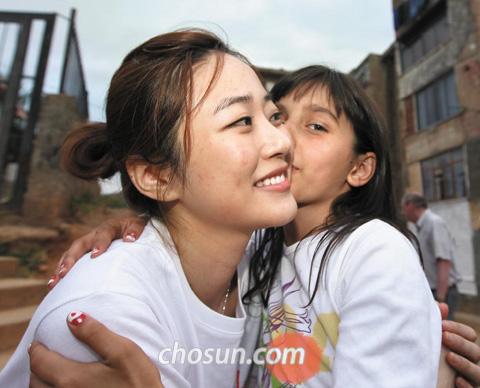 A girl kisses Kim Hyo-jin at a residential area in Dibra, Albania, during the actress' visit to the country in her real-life role as an ambassador for the charitable organization World Vision.

Actress Kim Hyo-jin's real-life role as a promotional ambassador for the evangelical charity World Vision has taken her to danger spots around the world. She has visited some of the poorest countries on the planet, such as Mongolia, Laos, and Uganda, and even found herself engaged in volunteering activities in Sudan last year amid a pitched gun battle.

However nothing prepared her for what she encountered in Albania, where the dire conditions had almost stripped local children of their will to live.

"When I was in Africa, I would hear children talk about their hopes. But the children here do not seem to cherish any dreams at all. I never imagined such a [miserable] place could exist in Europe", said Kim, who has been working with the charity since 2005.

She put on a brave face when she first met the Albanian children, but shed tears when she had to leave them. At this year's summer camp hosted by the charity organization in the eastern European country, Kim sought to plant the seeds of hope in some of the kid's minds.

"Amid such awful conditions, it seemed there was nothing I could do to make things better. But I saw the children become filled with hope after the camp", she said. "I'd like to help them so that more positive changes can take place [in their lives]".

Kim now sponsors a dozen children in Asia and Africa. When Haiti was struck by an earthquake last year, she and her boyfriend, actor Yoo Ji-tae, each donated W10 million to help the victims (US$1=W1,052).

Through World Vision, the only Korean non-governmental organization working in Albania, over 5,500 children have found sponsors, and another 1,500 are waiting for someone to help lift them out of their desperate situation.

"Actress Kim Hyo-jin Takes Message of Hope to Albanian Children"
by HanCinema is licensed under a Creative Commons Attribution-Share Alike 3.0 Unported License.
Based on a work from this source