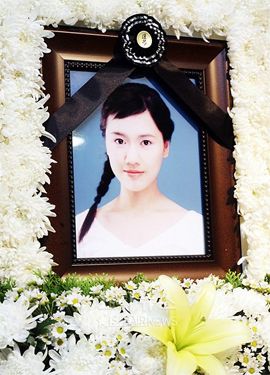 Actress Lee Ae-jeong (20) was belatedly reported to have died of a brain tumor.

The news first broke on the Internet Thursday.

Diagnosed with the disease in July last year, Lee underwent two surgeries and was relocated to the provinces, where she passed away on Sept. 6.

Since playing the child role played by Han Chae-young in the famed drama series 'Autumn in my Heart', Lee had been regarded as a promising young talent.

She reportedly did not want news of her ailment to be released to the public.

Since her death, a growing number of netizens have visited her Cyworld homepage to pay condolences. Greetings that Lee wrote on the site before she died include the message, "Thank you everyone. I'll heal quickly to repay your gratitude. Thank you. I love you".