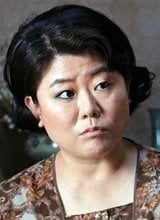 Actress Lee Jung-eun got the most screen time last year, according to an analysis by the Korea Film Council released Sunday.

Lee mostly took on supporting roles in films, most of which were hits. She appeared in five films including "A Taxi Driver", "The Battleship Island", and "The Running Actress", which drew a total of 23.81 million viewers last year.

"Lee looks like The Girl Next Door, creating a familiar impression, but she is very versatile and fit for any role", movie market analyst Kim Hyung-ho said.

Actor Yoo Hae-jin was next, drawing over 20.37 million moviegoers with a string of films such as "A Taxi Driver", "Confidential Assignment" and "1987: When the Day Comes".

"Actress Lee Jung-eun Pulls Most Viewers with Supporting Roles"
by HanCinema is licensed under a Creative Commons Attribution-Share Alike 3.0 Unported License.
Based on a work from this source