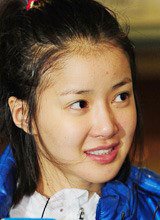 Actress Lee Si-young will join the boxing team of Incheon City, and the Incheon Sports Council said it will have a joining ceremony at Incheon City Hall on Thursday morning to hammer out all the details.

At present, four boxers including Shin Jong-hun, a member of the national team, officially fight for Incheon. Lee will train with them and participate in bouts.

She picked up the sport in 2010 and won the 47th Seoul Amateur Boxing Match the following year. The actress is now a promotional ambassador for the 2014 Incheon Asian Games.

"Although Lee isn't from Incheon, she got involved with the city while doing activities as a promotional ambassador for the Asian Games, so we have kept in contact with her and finally managed to persuade her to join the team", said a council official.

"Actress Lee Si-young to Don Boxing Gloves for Team Incheon"
by HanCinema is licensed under a Creative Commons Attribution-Share Alike 3.0 Unported License.
Based on a work from this source