Actress on Magazine Cover With Daughter 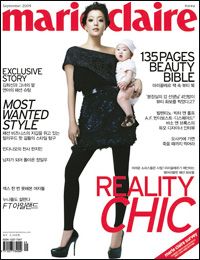 Kim Hee-sun, one of South Korea's top actresses, has unveiled a photo of her baby daughter through a Seoul-based fashion magazine.

Kim, 32, appears on the cover of the September issue of Marie Claire Korea, the South Korean edition of international magazine Marie Claire, with her daughter Yeon-a.

Kim, a hallyu (Korean wave) star who gave birth to her baby in January, had stopped short of showing any more than Yeon-a's hands and feet on her blog.

The cover featuring Kim and her daughter will also be used in other Asian Marie Claire editions, according to press reports.

She has also appeared in several movies, including the martial arts fantasy "Bichunmoo" and "The Myth" alongside Chinese superstar Jackie Chan.