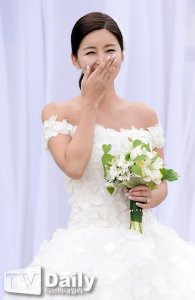 Actress Park Sol-mi of the "All In" fame will return to TV screen for her first acting role in three years. She is to star in weekend drama series "My Woman" due to air in July. She will play a talented and multilingual career woman named Sera. The main character Sera is an ambitious woman, who betrays her long-time boyfriend in order to attain the riches and enter high society.

Park's last regular appearance on TV was in KBS drama "Golden Apple" in 2005. Since then she has starred in the 2007 film "Paradise Murdered" opposite Park Hae-il. She said that it took her a long time to come back to TV, because she took care to select a role that fit her best. Park thanked her fans for waiting patiently during the hiatus and added that the character Sera was very appealing, because Sera has both the bright and dark sides to her personality.

"My Woman" is a remake of "Terminal", a high-rating drama during the 1980s. The new version will be written by Lee Hee-woo and Choi Seong-sil and directed by esteemed producer Lee Kwan-hee.