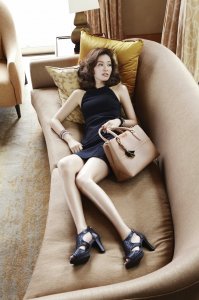 European directors are praising Korean actress Son Tae-young as one of the world's most beautiful actresses.

The foreign directors praised Sohn for having beautiful Asian eyes and lips and "rich, beautiful and sophisticated facial expressions". Sohn was the first Asian actress they have worked with.

Son recently appeared with Kim Kang-woo in the critically acclaimed film "The Railroad", directed by Park Heung-shik. The film won a special award given by the International Federation of Film Critics, during the 25th Torino Film Festival in Italy.

"The Railroad" is about two lost souls (played by Kim and Son), who find themselves stranded at the last railroad stop before the DMZ on a snowy night. As they spend the night together, they reveal their inner pain to each other.