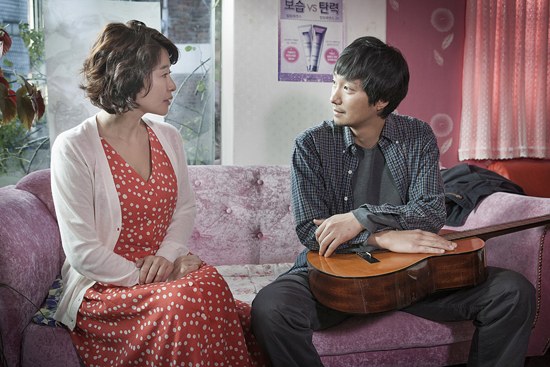 "Aging Family" a movie about break ups and resolution has a good set of leading acts.

In this competition called 'life', three brothers and sisters fail and return to live with their mother. The casts are Park Hae-il, Yoon Je-moon, Gong Hyo-jin, Youn Yuh-jung and Jin Ji-hee.

The other side acts are also fun to watch. Soo-ja (Ye Ji-won), the neighborhood's hair dresser is the love of Park Hae-il and Yoon Je-moon. Director Song Hye-seong personally created outfits that emphasized on Soo-ja's voluptuous character. She swoons the two men with her deep cut red dress.

Kim Young-jae is also one to stand out. He takes on the role of Geun-bae, Mi-yeon's (Gong Hyo-jin) third husband. He sacrifices everything for her.

Meanwhile, "Aging Family" will be released on the 9th.

""Aging Family" Ye Ji-won"
by HanCinema is licensed under a Creative Commons Attribution-Share Alike 3.0 Unported License.
Based on a work from this source