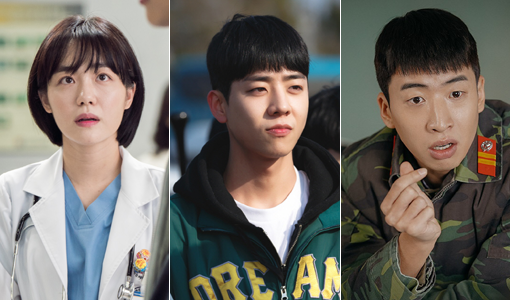 If you're a fan of the dramas, you'd remember them right away. They are So Joo-yeon, Chae Jong-hyeop and Yoo Su-bin from SBS's "Dr. Romantic 2" and "Stove League", and tvN drama "Crash Landing on You". They have been getting some attention thanks to the dramas that are well over the average 15% in viewership, and bring life to the drama department.

So Joo-yeon takes on the role of a medical specialist in emergency medicine, Doctor Yoon Ah-reum in "Dr. Romantic 2". She is responsible for lifting up the mood in a dark environment and she's also in a romantic relationship with Kim Min-jae-I's role of Nurse Park Eun-tak. She's at a point where fans say watching Ah-reum is soothing.

So Joo-yeon debuted in 2018 and usually played sorrowful characters, but this time she managed to successfully change her image. In the MBC drama "My Healing Love" and KBS 2TV's "I Hate Going to Work", she respectively played a pitiful character who was bullied by her in-laws and at work.

Cha Jong-hyeop managed to draw attention on himself in "Stove League" as Yoo Min-ho, a pitcher on the professional baseball team Dreams. He comes in second after Ha Do-kwon in the role of Kang Doo-gi, in the goods sales of uniforms with back numbers.

This former model is 186 centimeters tall and his good looks add to his popularity. YNK Entertainment marketing team Kwon Young-hwa says, "He was so slim he had to increase his body weight a good 5~6 kilograms and built more form through weight training". Cha Jong-hyeop also said he wasn't a huge fan of baseball, but became one after studying the sport for the drama.

Yoo Su-bin, starring in "Crash Landing on You" as Kim Joo-meok, is a rookie actor worth looking out for. He increased his popularity by acting out a North Korean soldier who likes South Korean dramas. His realistic North Korean dialect has gotten him good reviews. His name came to light when he starred in the movie "Exit - Movie" as a man asking for help using the Morse Code.

He already knows what he's going to be in next. He confirmed a role in the tvN drama "Startup", written by Park Hye-ryeon from "I Hear Your Voice".

"Ah-reum, Yoo Min-ho and Joo-meok, the Three Hidden Talents"
by HanCinema is licensed under a Creative Commons Attribution-Share Alike 3.0 Unported License.
Based on a work from this source