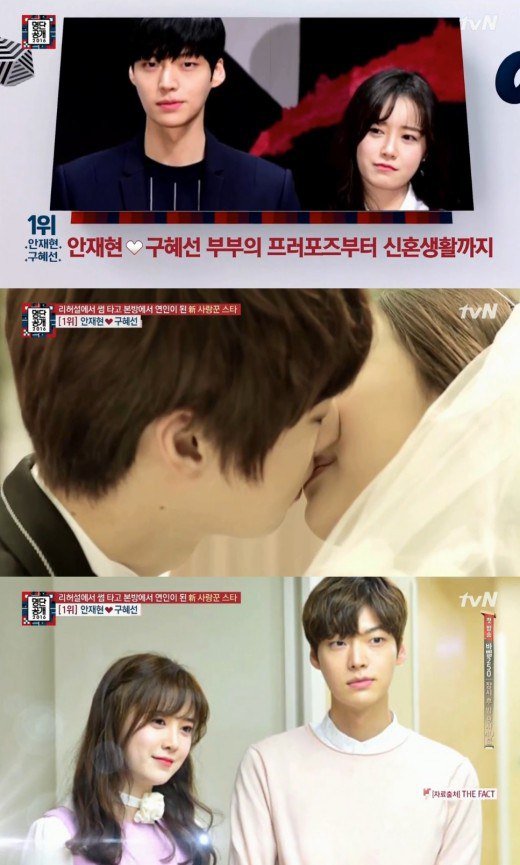 Kim Woo-bin and Shin Min-ah couple ranked eighth. The two stars met during shooting a pictorial for a clothing brand for the first time. And then their friendship turned into romance later. They live about 10 minutes away. It is known that the couple see each other two or three times per week for sure.

The seventh was Joo Wang-wook and Cha Ye-ryun couple. They overcame the seven year age gap and keep their love strong.

The couple on the seventh was Kwak Do-won and Jang So-yeon couple. The unique part about his couple is that Jang So-yeon fell in one-sided love with Kwak Do-won fist. And then Jang So-yeon acted proactively to earn Kwak Do-won's heart. The star couple at the fifth place is In Gyo-jin and So Yi-hyun who met in a drama.

The owner of fourth place is Yoo Ji-tae and Kim Hyo-jin couple. They met through a commercial for a clothing brand in 2003. Since then, Yoo Ji-tae was in one-sided love with Kim Hyo-jin for the next three months. After Kim Hyo-jin left to New York to study abroad, Yoo Ji-tae felt the empty spot of Kim Hyo-jin growing bigger. He drunk confessed his love to Kim Hyo-jin on the phone and he flew to New York as Kim Hyo-jin said, "If you come to New York, I'll date you".

Song Seung-heon and Liu Yifei couple ranked third. They keep their love across borders strong. Rain and Kim Tae-hee took the second place, whose marriage is most anticipated by many fans.

The lovely couple on the first place is Ahn Jae-hyun and Ku Hye-sun. These two stars were on some relationship when they co-starred in KBS 2TV's "Blood". They are having lovely sweet

"Ahn Jae-hyun and Ku Hye-sun, number one modern day lovey-dovey couple by 'Name List'"
by HanCinema is licensed under a Creative Commons Attribution-Share Alike 3.0 Unported License.
Based on a work from this source