All Actors and Actresses Wants to be on His Shows 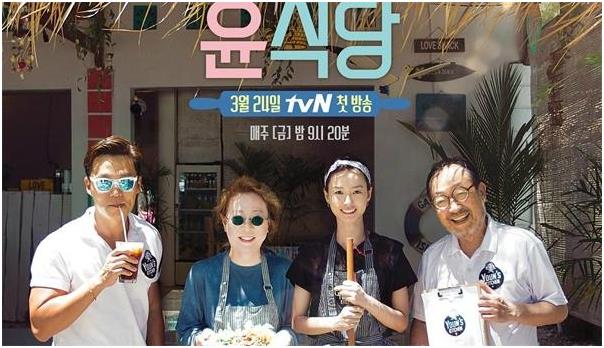 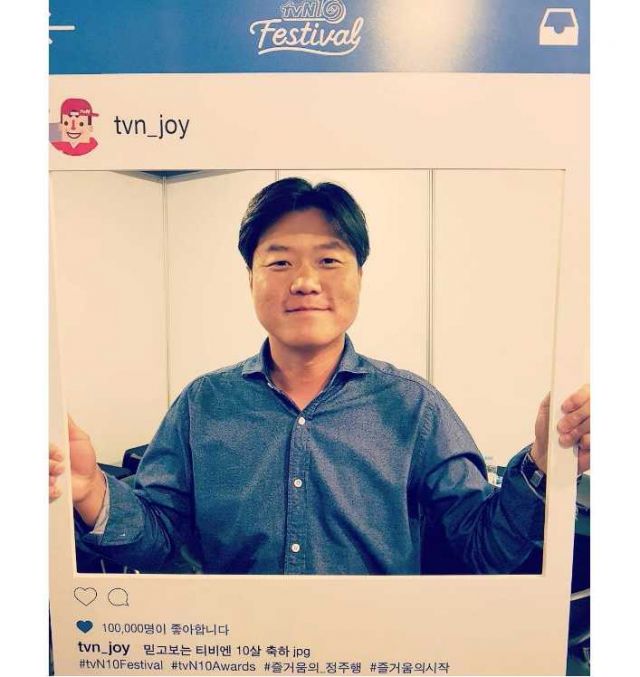 Na Young-seok PD was originally the producer of a popular variety show called "1 Night 2 Days". He moved his station to tvN in 2013, and he wrote a new page in the history of Korea's variety show.

His variety shows have 3 major characteristics. First is his ability to make the most laugh triggering scenes even from the most ordinary cuts – his sense in the little captions throughout the show is simply the awe-inspiring. Second, since he started working with tvN, he's been producing a lot of "Healing" variety shows. Either it be the beautiful scenery he captured in the camera under his direction, or the atmosphere he creates with certain situations, but everyone who watches his shows can definitely agree that his shows are healing. Lastly, he have a great eye in selecting his cast. He is famous for his ability to invite the actors/ actresses who would normally not participate in a variety shows and when he does it, he always have success in creating a special characters for them. For that ability, even the classy actors and actresses who avoids going on variety shows are willing to cooperate with him.

Since he moved to tvN, he have produced the Flower Series, Three Meals a Day series, New Journey to the West series, Newlyweds Diary and currently airing Yoon's Kitchen. 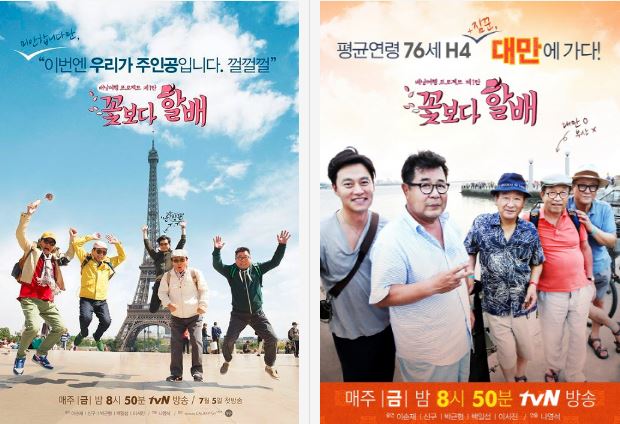 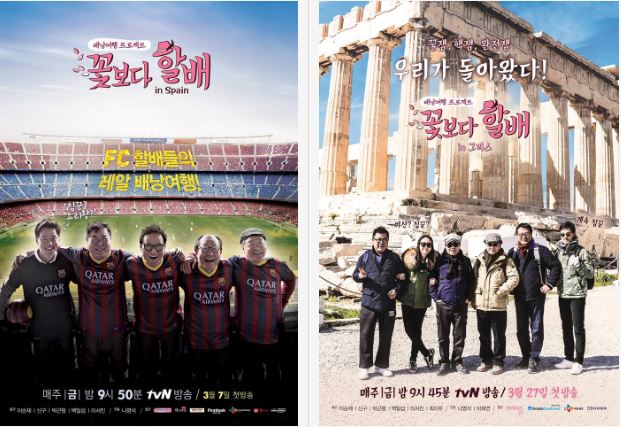 There are 4 seasons to it, traveling different countries. The cast is same throughout the season, which consist the grandpa actors: Lee Soon-jae, Shin Goo, Park Geun-hyung and Baek Il-sub. The average age of these 4 actors are 76 years. Of course, they needed an assistant, so they brought the Dimple beauty, actor Lee Seo-jin with them. On the 4th season, actress Choi Ji-woo joins the crew. 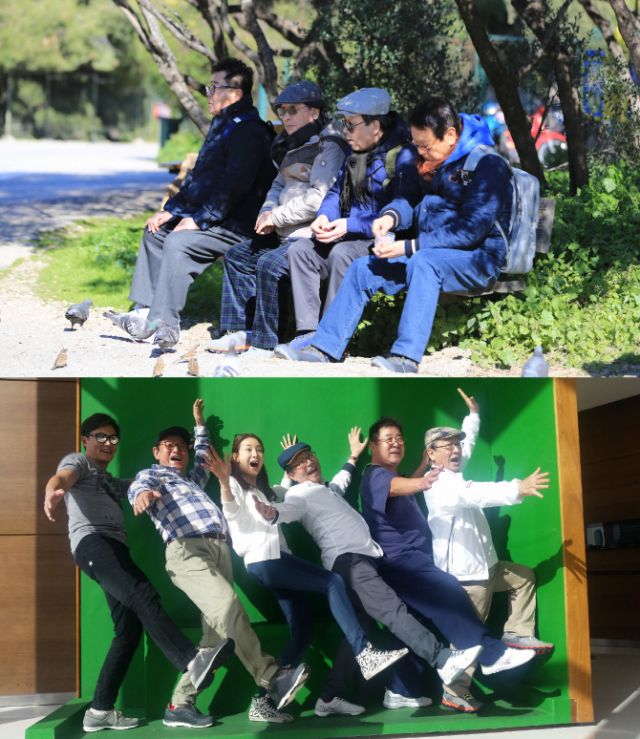 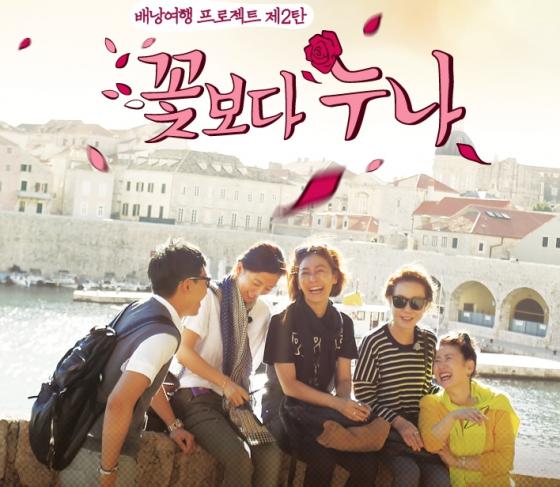 There's only 1 season to it, same concept as Grandpas over Flowers except it is with 4 top actresses. Youn Yuh-jung, Kim Ja-ok, Kim Hee-ae and Lee Mi-yeon is the main and they brought Lee Seung-gi for the assistant. They travel Turkey and Croatia. 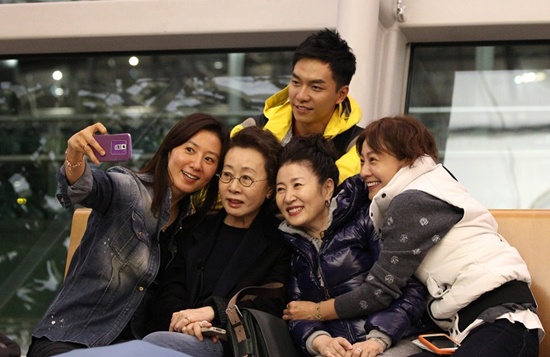 Sadly, there wouldn't be a next season since one of the cast, actresses Kim Ja-ok passed away due to lung cancer shortly after the show in 2014. 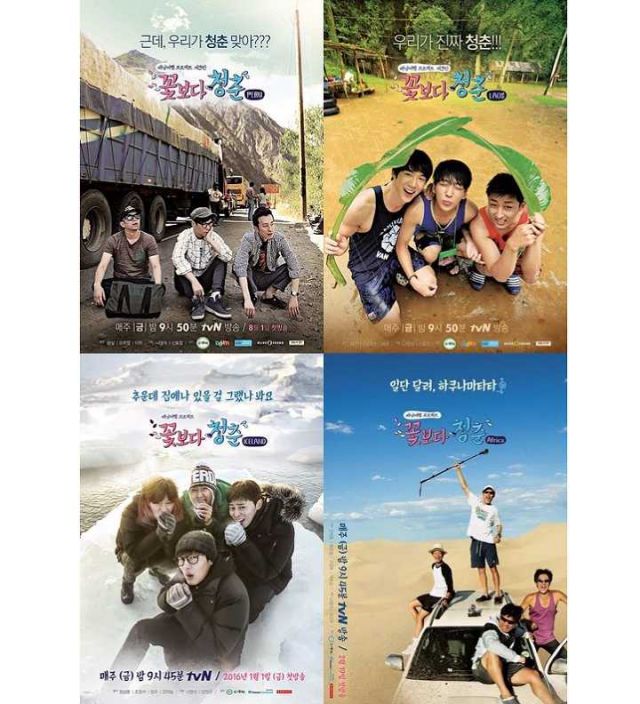 Youth over Flowers series have 4 seasons so far.

As you probably noticed from 2nd season and 4th season's cast, they like to "Kidnap" the cast of "Answer Me" series after the drama is finished, sort of to give them a vacation. 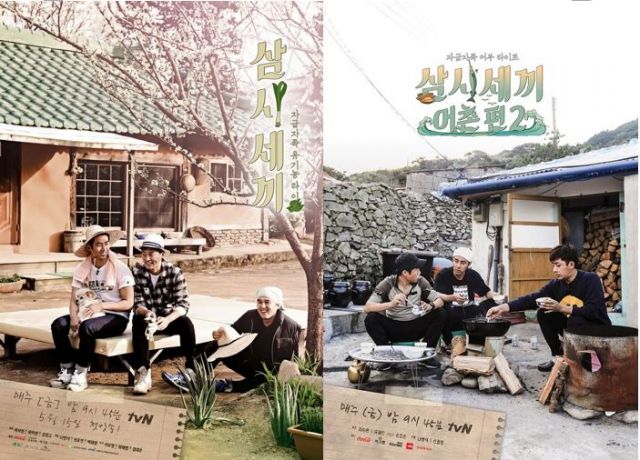 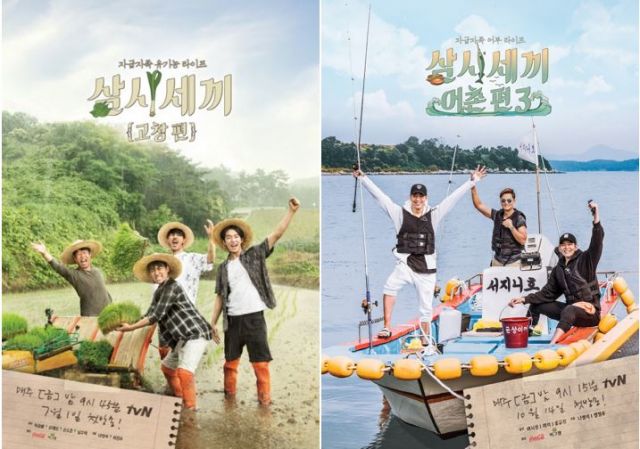 This is my absolute favorite show to watch on my passing time. It is slow paced, but that is why it's so healing and relaxing. It all started from Lee Seo-jin's comment on his ability to cook when he was on Grandpas over Flowers. Basically the show is about how few stars gets sent to a little villages for the season and make three meals a day. They will have to plant seeds, harvest crops, and go out fishing and what not to meet each day's needs. Technically there are 4 seasons to it. 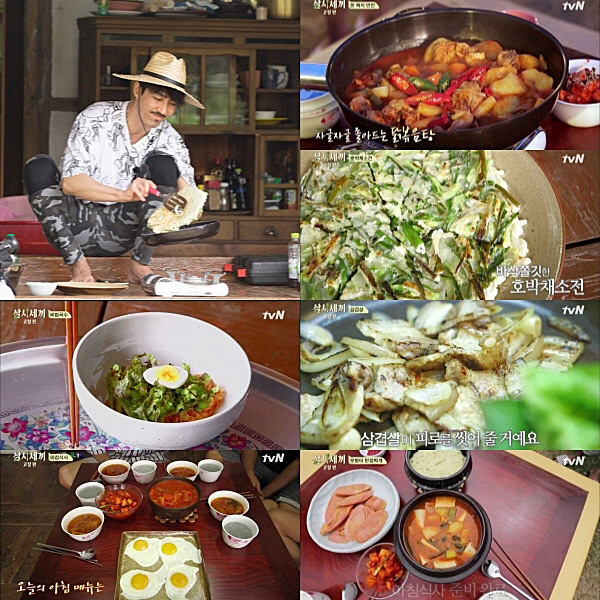 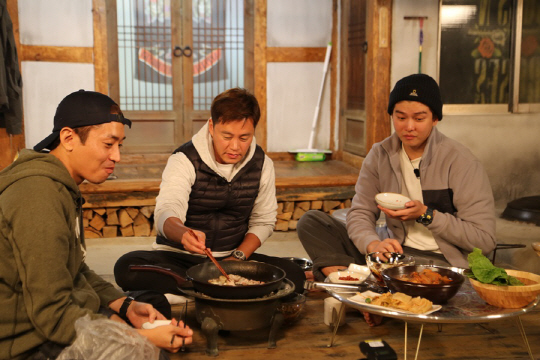 New Journey to the West series 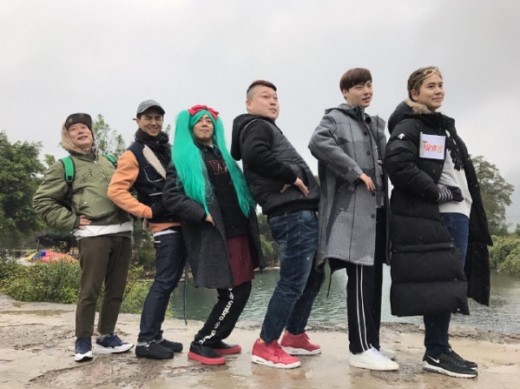 There are 3 seasons to it, and technically the 1st and 2nd season were aired online, not tvN. Main casts are the original cast from "1 Night 2 Days" and on the 1st season, Lee Seung-gi was with them but since he was leaving for the army duty, actor Ahn Jae-hyun was called to fill his spot. Which was the best choice ever. The cast travels China and does several missions and games. It's more of a comical, fast paced show. 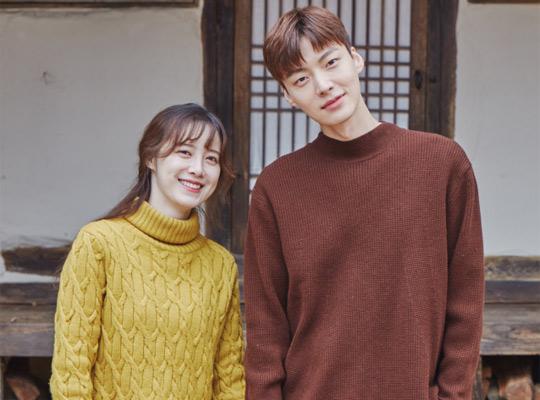 When Ahn Jae-hyun revealed his love story with actress Ku Hye-sun and married her, the show New Journey to the West (above) was being filmed. Since they were a newlyweds, Ahn Jae-hyun calls his wife every single day during the trip and he was not ashamed to make his love known to all. From that, Na PD got the idea to make this adorable show. 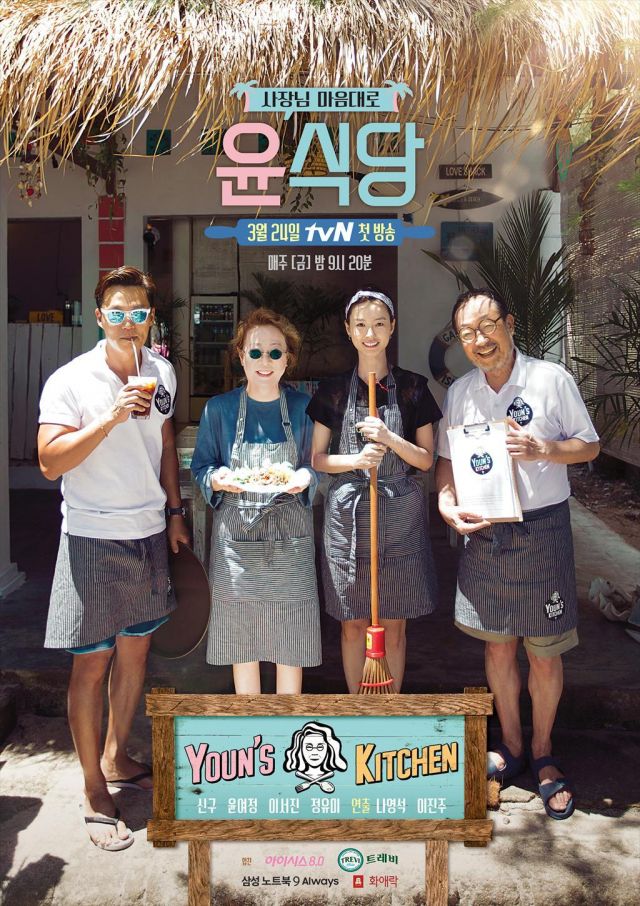 This show is currently being aired and it just began, so I don't have much information on it but we have familiar cast from the shows above. Actress Youn Yuh-jung, actor Shin Goo and Lee Seo-jin is in it. Also, actress Jung Yu-mi decided to join the crew and it was a surprise to all since she have not been on a variety show for last 13 years. 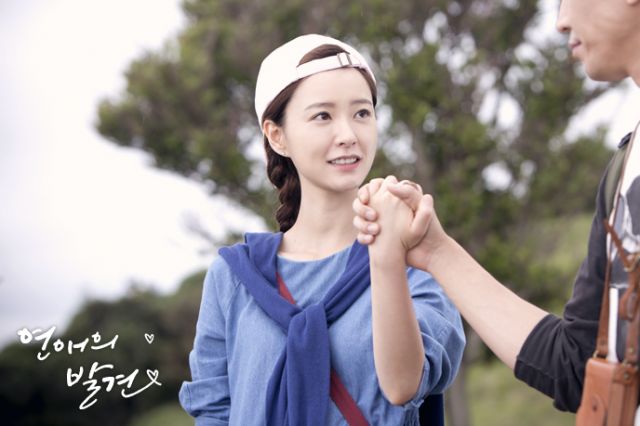 The crew opened up a tiny little Korean restaurant on an island near Bali. The more Na PD come up with new shows, I can't help but think he gets his ideas from mobile games like tycoon. Haha. 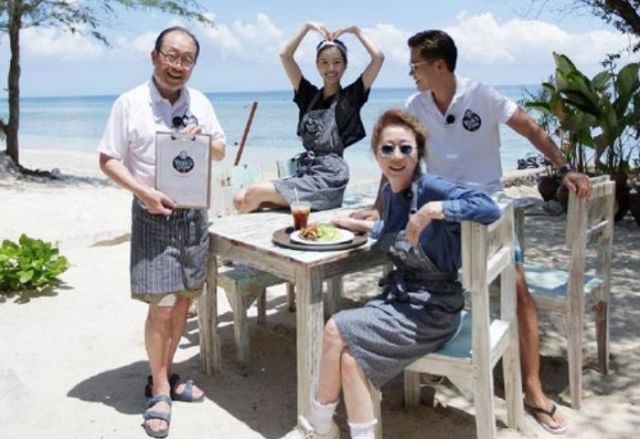 As you can tell, the casts of all these shows are extra-ordinary. The faces that are hard to see on normal variety shows. These stars trust Na PD's abilities and his ideas (No matter how new and risky it may seem at first) and support his adventure by joining his crew.

"All Actors and Actresses Wants to be on His Shows"
by HanCinema is licensed under a Creative Commons Attribution-Share Alike 3.0 Unported License.