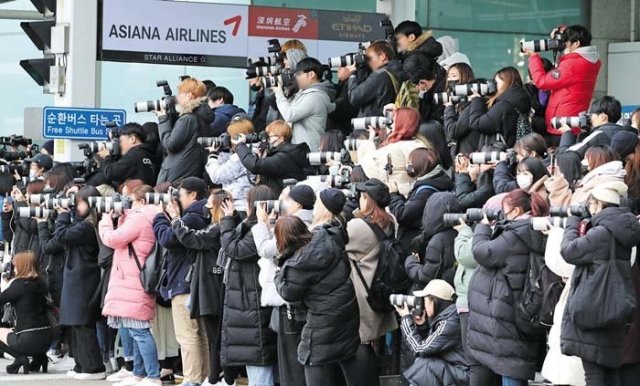 Jihyo of girl group TWICE was injured last month when she was mobbed by fans at Gimpo International Airport on her return from overseas trip. One fan tripped over a photographer's ladder and accidentally lunged into the dance group star.

The arrival lobby was filled with semi-professional fans who wanted to take pictures of their idols.

A member of boy band GOT7 also tripped and fell in Qingdao airport in China last week.

The amateur paparazzi carry expensive camera equipment to snap high-resolution photos and videos of their idols. Besides airports, they also mob them in front of TV studios and even outside their homes.

Top-tier stars like BTS and EXO draw hundreds and even thousands, who typically track them through social media networks, where they often have to pay W5,000 to W20,000 for a tidbit such as flight information (US$1=W1,168).

One industry insider said, "Flight information is purchased not only by Korean fans but overseas as well. We have no idea how they leak".

Smaller talent agencies and lesser starlets often rat on themselves to generate hype. Some agencies even set aside photo zones for the fans, and some fans pay professional paparazzi to do their dirty work for them.

The paparazzi charge around W80,000 per star, and the price spirals for video footage. Stock photos are cheaper, costing around W40,000 for a set of 55.

The reason these semi-professional fans are so aggressive is that they stand to make good money from their pictures. A so-called "random box" of photos and posters fetches around W350,000, and the price goes up depending on the popularity of the stars. Some earn tens of millions of won a year.

But many struggle to break even, which makes them even more aggressive. They buy tickets so they can accompany the stars into the departure lounge, but some never take the flight, which causes trouble with airport security, while others pester them on the plane.

BTS member V said earlier last month, "There are people who sit in front of us or next to us on long-distance flights after finding out that we are on board. It was really uncomfortable being unable to rest in our private space".

The burgeoning market has also resulted in fraud, with some con artists charging money for photos that simply do not exist. But since the charges are small and the victims are teenagers, it is rarely worth taking legal action.

A staffer at talent agency JYP said, "We will take strong legal measures against fans who follow our artists after they pass through the customs gate at airports and those who endanger their safety".

"Amateur Paparazzi Endanger K-Pop Idols"
by HanCinema is licensed under a Creative Commons Attribution-Share Alike 3.0 Unported License.
Based on a work from this source