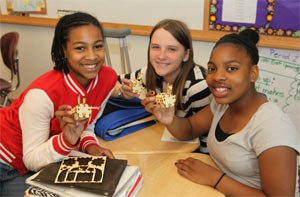 After months of training, it was finally time for sixth graders at Alice Deal Elementary School in Washington DC to school the Korean embassy on Korean culture.

For the final event of the Embassy Adoption Program at Deal, which paired the Korean Cultural Center with 130 students for a series of visits during spring 2012, Team Seoul gave presentations on anything and everything they had learned about Korea, with creative projects ranging from presentations on Korean food and pop music, to retellings of Korean folk tales and virtual travel tour videos.

Their captivated audience on June 7 included KCC Director Byung Goo Choi, as well as staff who had organized cultural events with the students throughout the spring such as a traditional games workshop, Taekwondo lessons, traditional music performances, and presentations on Korean history, culture, and society. The visits were complimented by in-class learning about Korea.

Actually, I didnt know much about Korea before this program, said student Nerissa Tunnessen. I learned a lot and enjoyed especially learning about the food and culture.

Student Claire Medina did her project on K-Pop, Koreas trendy pop music scene, saying that the music resonated with her.

K-pop is my favorite part of Korean culture because I can just listen to it without any struggles, Medina said. I want to thank all of the embassy people to get this opportunity.

Harlan Kinzer, who teaches social studies and geography at Deal, said that her students asked to work with the Korean embassy at the start of the school year and chose the name Team Seoul accordingly, after Koreas capital city.

It has been our privilege to learn about Korean history and culture, Kinzer said. Our students have really enjoyed working with [the Korean Cultural Center]. You are by far the most dedicated and organized embassy Ive worked with! she also said earlier.

I am really impressed by your interest toward Korea, said Director Choi to the students, after an hour of at times imperfect but always entertaining and endearing presentations. I am surprised that you all achieved these things in a very short time and am very pleased to see your great achievements.

The Embassy Adoption Program, which began in 1974 and this year included more than 90 embassies, is designed to immerse DC public school students in a foreign culture over the course of multiple visits, building a deep understanding in the process. This was the first year for the Korean embassy to take part, but not the last.

Honestly, it was incredible, said Kinzer of the Korean programs hosted at the school in the spring. The students were engaged in experiential learning. Students that are often quiet in the classroom came out of their shells. Students who do not excel academically were able to shine in a way I have never seen before. It was awesome to see this other side of my students. It was also important for their peers to see this other side.

Kinzer went on to say that allowing students to learn by doing made their World Geography & Cultures that much more real and meaningful.

Students are exposed to culture, knowledge, and experiences they otherwise would know nothing about, Kinzer said. I have really enjoyed working with Korea this year because they really understand the importance of experiential learning and positive experiences in teaching children about other cultures.

"American Students Turn the Tables on Korean Cultural Center as Embassy Adoption Program Closes"
by HanCinema is licensed under a Creative Commons Attribution-Share Alike 3.0 Unported License.
Based on a work from this source