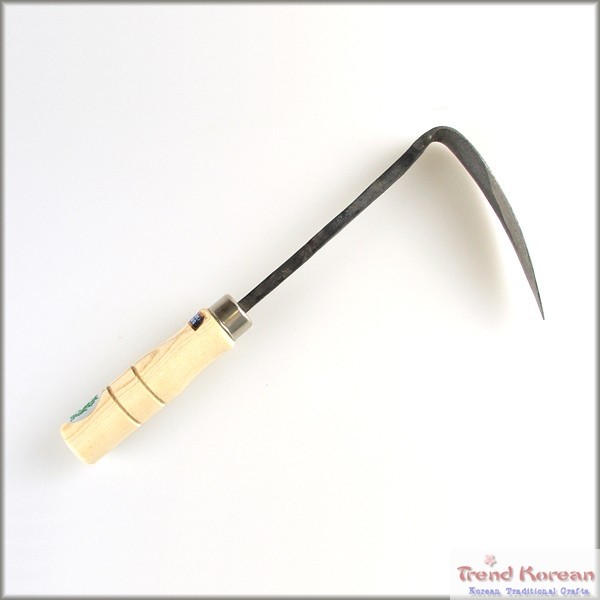 Recently, I was surprised to find that "homi" are sold on Amazon.com. Not surprisingly, the online shopping site doesn't call it homi, opting instead for "Korean-style hand plow" or the "EZ-digger". What is surprising, however, is the effusive praise from the homi's many satisfied customers from around the world.

To Koreans who live in the countryside, homi are like air. That is to say, they have always been a ubiquitous presence around village homes, and in the hands of the elderly women who typically work Korea's small-scale farms.

What's more, homi are cheap. At a farmer's market or Nonghyup agricultural cooperative, you can usually pick one up for just 2,000 or 3,000 won (less than $3). Some years ago, my husband said to me, "Your one-day fee for simultaneous interpretation could purchase a truck-full of homi".

There is a saying, "Only a fool would steal a homi". This saying probably comes from the fact that homi is inexpensive and plentiful. Perhaps this is also why I've never considered its true merits.

It was only after reading the simple tool's glowing testimonials that I reconsidered the humble homi. I can't help but include some of the many comments:

"I adore this tool. It has replaced my small hand-rake, trowel, hand-hoe and dibble. I never thought the trowel would be displaced!"

"It's the only tool I've ever used that easily gets grass with all its roots out of an already planted bed with minimal harm to perennials. If all it had done for me was letting me get grass roots out so that grass doesn't just grow back, that would've been sufficiently splendid".

"It turns soil, allows me to mix compost into old established beds that need soil refreshed, trenches for bulbs, removes weeds in a quick motion, breaks up soil with such ease that I'm no longer tempted to just put a new plant into a 'socket' of a hole without loosening lots of soil around it".

"I got this tool because I needed a plow and this was the most affordable option. It is well worth every penny and then some. Using this, I was able to make three or four rows in my garden in the same amount of time as it took to make less than half of a row with my standard hoe, and it seemed to take less effort, too".

Another user said he rarely used any other tool in his garden. He said he had been telling everyone he knew about it. He even carried it around in his car for a while to show to people and recommend it to other gardeners.

One woman wrote, "The homi has been used in Korea for centuries, where the name means 'farmer's knife'." I wonder how she knows something that we Koreans don't even know.

It's true that the homi's basic design and mechanics are perfect. Honed by Korean farmers over the centuries, the homi combines a sharp point for digging and cutting with a delicately angled face. It's also the perfect weight. Like the precision of an expensive golf club, it doesn't require brawn to work its magic.

More than anything else, its versatility is remarkable. In the words of one effusive customer, "If you only ever buy one gardening tool, this one should be it. It does more and costs less than most of the other tools I own and rarely ever use". Now that I am reacquainted with this ingenious garden device, I am calling my newfound appreciation, "homi hallyu", or love of a Korean farm tool.

As far as I know, no one invented the homi and no one has a patent for it. These tools are simply a part of Korea's tangible agricultural heritage. In contrast, farmers and merchants in other countries have trademarked their local tools. Who knows? Some years from today people may mistakenly assume that Korea's homi hails from somewhere else, just as some assume that kimchi is from Japan!

I don't mean to claim that homi originated in Korea. I imagine that hard-working farmers in other cultures developed similarly useful and inexpensive tools over the centuries. Indeed, my own collection of garden tools includes many beautifully designed hoes, trowels, ploys and tillers from Germany and the Netherlands. Each has a purpose ― to cut and pull out weeds or gather mulch and leaves, etc. Yet, despite their lovely colors and nice finish, when compared with the homi's efficiency, they look like dumb toys.

This brings me back to the fact that despite its longevity and multiple functions, the homi is still a bargain. In fact, in my opinion, it's "too" cheap. On Amazon.com, a long-handled homi costs under $30, while the most popular short-handled one is only $15.95.

Some complain that the homi looks too plain. I agree that the blade can look particularly hand-tooled. Given this reality, when I compare the homi to my European tools, sometimes I wish that manufacturers would make minor cosmetic changes to the homi in order to increase its price two or three-fold.

Then again, I didn't buy my homi to hang it in the garage to look pretty. I need a functional tool, and given its unparalleled performance, Korea's indigenous homi surely deserves its global recognition.

The writer is the chairwoman of the Korea Heritage Education Institute (K*Heritage). She can be reached at heritagekorea21@gmail.com.

"An unknown hallyu - 'homi'"
by HanCinema is licensed under a Creative Commons Attribution-Share Alike 3.0 Unported License.
Based on a work from this source