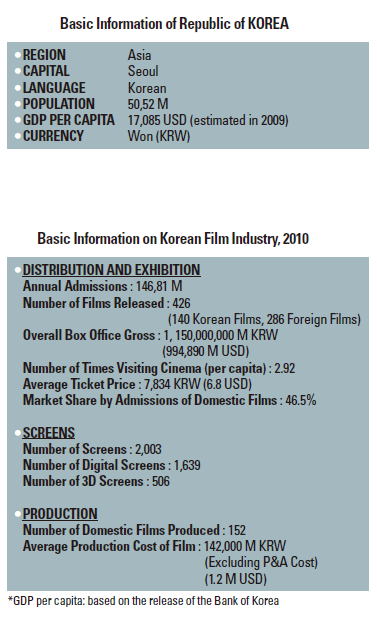 In 2010, the Korean film industry witnessed several significant changes, many of which were directly related to the worldwide success of the Hollywood blockbuster "Avatar". The box office gross increased by 6.5% as compared to last year, largely due to the increased ticket prices of 3D films, which boomed in popularity following "Avatar". However, the number of admissions actually decreased by 5.2%, scoring a total of only 146 million admissions. The number of times the average Korean went to the movie theater also dropped from 3.15 per individual in 2009 to 2.92 in 2010.

Since 2007, the Korean film industry has been struggling to counteract the collapse of the ancillary market. The industry made significant progress on this front in 2010 by using the nation's strong IT infrastructure to launch new initiatives such as a legal download service and the IPTV market.

In 2010, seven Korean films ranked in the country's top 10 at the box office, and the market share of Korean films rose to 46.5%, helping the industry's earnings rate to remain relatively stable.

* This report is a brief version of [2010 Report of Korean Film Industry] which was released by KOFIC Film Research & Development
Center on Jan. 20, 2011. The figures in this report are provisional and the definite figures will be released in the 2011 yearbook.
* The exchange rate is based on the average exchange rate of the Bank of Korea (1 USD = 1,156.0 KRW)

CJ Entertainment has dominated the distribution market for the last eight years, and 2010 was no different. CJ Entertainment distributed 44 films in 2010 and captured a 27.8% share of the marketplace. 20th Century Fox Korea (which distributed "Avatar" and "Knight and Day") ranked second with a 10.9% share, followed by Lotte Entertainment, which scored a 10.6% share on the strength of hits like "71-Into the Fire" and "Cyrano Agency".

The number one film at the box office in 2010 was , which triggered a boom in the popularity of 3D films. Not only "Avatar" was the biggest hit of 2010, but its 13.41 million admissions broke the all-time record at the Korean box office, surpassing "The Host", which drew 13.02 million admissions in 2006. The Korean film "The Man From Nowhere" ranked second despite having the disadvantage of being rated R. In fourth place was "Secret Reunion", which notably attempted to depict the relationship between North and South Korea in a new light. The film's leading actor, Gang Dong-won, became one of Korea's top box office stars with the consecutive successes of "Haunters" and "JEON WOO CHI : The Taoist Wizard". 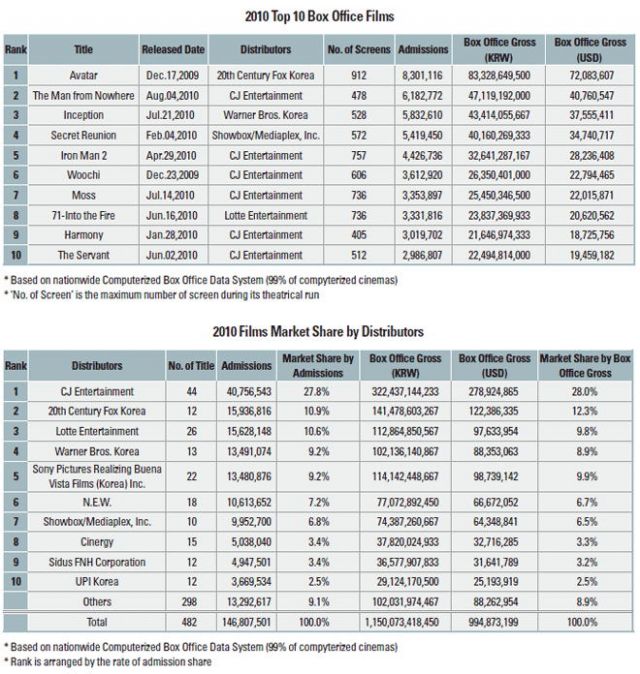 The market share of US films in 2010 was 47.3%, a bit higher than the 46.5% of Korean films. However, if only those films released in 2010 are included (thereby excluding "Avatar", which was released at the end of 2009), the market share of US films drops to 44.5%, 3.3% less than that of Korean films. Unlike previous years, films from Europe, China (including Hong Kong and Taiwan) and Japan each captured about 2% of the marketplace.

The most remarkable trend in the market was the rise of 3D films, as demonstrated by the fact that five of the top 10 foreign films were 3D films. 3D films took in 11.4% of the total admissions and earned 16.5% of the total gross of the Korean box office. 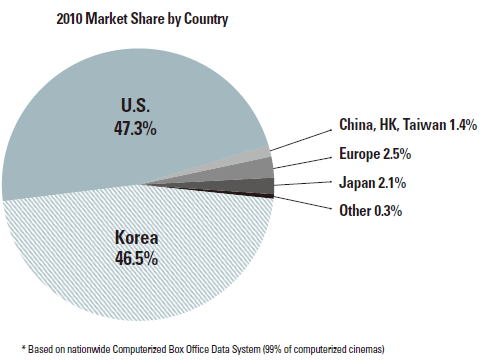 In terms of the global market, the proportion of Korean film exports going to the Asian region dropped by 34.4%. However, the proportion going to the European region increased 72.1% and that of the North American region went up 59.4% compared to last year. In the European region, award-winning films and films by famed directors played a key role for boosting exports. In North America, the rise was driven by the launch of the major multiplex CGV LA for the direct distribution of Korean films.

Seeking to expand into the international market, the Korean Film Industry has begun a wide range of cooperative programs with foreign partners, including the first stage of production and exchange of CG/VFX/3D technology in order to overcome the limitations of the domestic market and push the boundary of the industry.

Korean production companies have obtained orders from 16 films and contracted with 22 films for providing CG, VFX, 3D converting, editing, DI, special make-up, visual effect, stunts and sound mixing services. The North American region took the biggest proportion with 75.95% of the total amount of exports. The Chinese market (including Hong Kong) had the highest number of contracts with 18, representing 81.8% of the total.

"Analysis of 2010 Korean Film Industry"
by HanCinema is licensed under a Creative Commons Attribution-Share Alike 3.0 Unported License.
Based on a work from this source