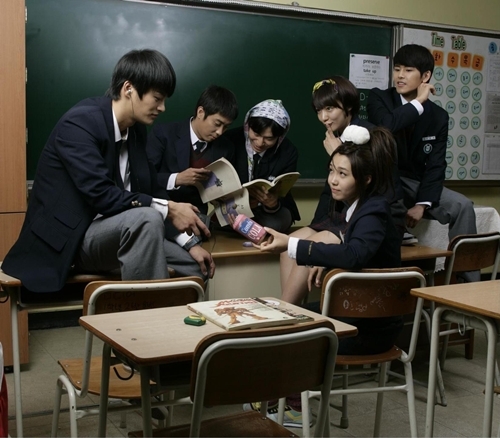 The sixth episode of tvN "Answer Me 1997" revealed that the couple to announce marriage in the year 2012 was Hak-chan (Eun Ji-won) and Yoo-jeong (Shin So-yul).

Previously, the 6-way love line in the 1997 included Yoon-je (Seo In-guk) who grew up with Si-won for 18 years but now sees her as a woman, Joon-hee (Lee Ho-won) who likes Yoon-je in secret and Yoo-jeong (Shin So-yul) and Hak-chan (Eun Ji-won) who got close while trying to comfort her from the pain she got from Yoon-je.

In the year 2012, it turns out Si-won is pregnant and the narration says, "My husband is at his table too" and makes one wonder if she accepted Yoon-je or went along with Tae-woong (Song Jong-ho) who fancied her. Or she may even have married a third character.

Netizens say, "I am so curious", "The 6-way love line is interesting" and more.

""Answer Me 1997" 6-way love line... who's Jung Eun-ji's husband?"
by HanCinema is licensed under a Creative Commons Attribution-Share Alike 3.0 Unported License.
Based on a work from this source