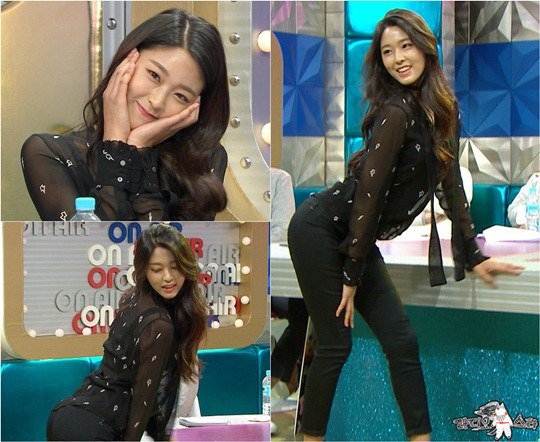 Seolhyun appeared on the TV show "Radio Star" and charmed the entire studio as well as a few tricks and danced sexily.

Seolhyun wore a black see-through blouse showing off her sexiness. However, she charmed everyone in the studio with her cuteness and charm.

Stills of the recording session show Seolhyun showing off her charm by cupping her face with her hands and asking if she looked cute.

This is her first time on "Radio Star" so she even prepared a few tricks for the MCs and guests. She imitated a noise that sounded like a teapot boiling.

In the end, Seolhyun did a sexy dance that curved her body line and Lee Dong-hwi was clapping before he knew it.

Not only that, Seolhyun was very open and honest about herself. She said she had white spots all over her body and that she falls asleep well if she rubs her lips with something.

"AOA Seolhyun stirs up studio with sexy dance"
by HanCinema is licensed under a Creative Commons Attribution-Share Alike 3.0 Unported License.
Based on a work from this source