"Arang and the Magistrate" Yeon Woo-jin and Kang Moon-young 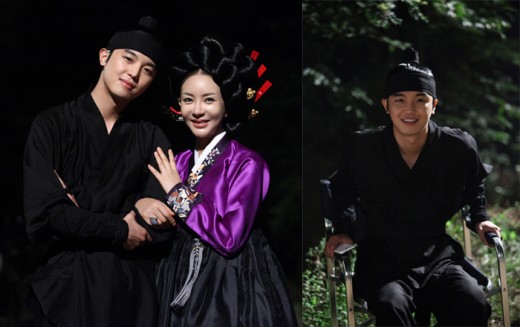 Joo-wal (Yeon Woo-jin) revealed his cruel side on the fifth and sixth episodes of the drama as he covered Arang's face in a mask and kidnapped her, only to stab a knife into her.

It turned out that behind all this was Eun-oh's (Lee Joon-gi) mother Seo (Kang Moon-young) who was thought to be missing 3 years ago. The true identity of Seo who had to suck on a young woman's soul every night of the full moon was a horrifying twist to everyone.

They don't look anything like the terrifying characters that they are in the drama but much more friendly and kind-looking. They are both smiling with Kang's arm in Yeon's.

Those who have seen this say, "They are so cute", "I'm not getting used to this after seeing them being so cruel" and more.

""Arang and the Magistrate" Yeon Woo-jin and Kang Moon-young"
by HanCinema is licensed under a Creative Commons Attribution-Share Alike 3.0 Unported License.
Based on a work from this source