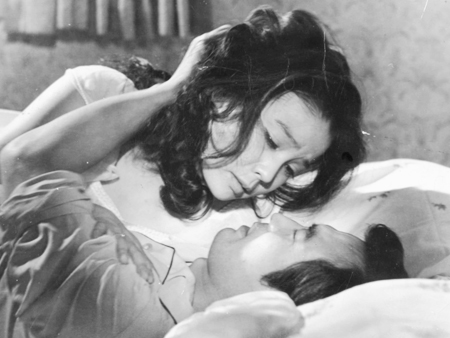 (Above picture: Actress Yoon Jung-hee and Kang-Shin Sung-il in a scene from Kim Soo-yong's "Night Journey")

Cinephiles will have a rare chance to look at some of Korea's hallmark 1960s "literature films". The Korean Film Archive (KOFA) has released a DVD collection of masterworks by Kim Soo-yong, a leading filmmaker of the Golden Age.

Kim is renowned for adapting literary works to depict various aspects of contemporary life, adding to the richness of one of the most productive, artistically experimental decades in Korean cinema history.

These films were dubbed "literature films" after the Japanese term for a similar batch of movies in the neighboring Asian country. 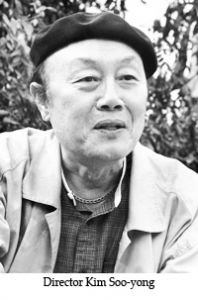 However, according to Kim Yeong-jin, professor of film at Myongji University, Kim did not turn to novels because he felt

literary elements were necessary to harness cinema to artistic ends; rather he read through Korean and Western books in search of original plotlines during a time when many filmmakers copied foreign scripts.

Furthermore, he went on to adapt famous novels such as those of Maupassant, despite the opposition of producers. He told stories in a modern audiovisual language and was highly successful in the box office.

Though the veteran filmmaker has made over 100 films, the four works featured in the box set provide a peek into the 82-year-old's oeuvre at the height of his creativity.

"The Seashore Village" (1965), based on Oh Yeong-su's story about the dramatic fate of a fisherman's wife, is credited for paving the way for local films inspired by literature, while "Confession of an Actress" (1967) sheds light on the 1960s film business centered in Chungmuro, Seoul.

"Mist" (1967) introduced modernist concepts in Korean cinema by translating Kim Seungok's story of ennui, the novel "A Trip to Mujin", to the big screen. Last but not least, "Night Journey" (1977), about a single woman's romantic ventures, had to endure censorship and wait four years to be released due to the strict media regulations of the 1970s.

Younger audiences in particular may be interested to see Yoon Jung-hee - who recently won international critical acclaim for her role in Lee Chang-dong's "Poetry" (2010) - in "Mist" and "Night Journey".

Fans will be able to enjoy audio commentaries by Kim himself as well as famed critics and directors such as Chung Sung-ill.

Subtitles in Korean, English and Japanese are available, as well as a booklet with related text in Korean and English.

In addition to the four films, the DVD collection includes a 56-minute documentary about the veteran filmmaker, and a six-minute clip that compares "Mist" before and after the film underwent digital restoration. Rated 18 and over, the DVD can be purchased at KOFA, located in Sangam-dong, or through its website (www.koreafilm.or.kr)

KOFA invites film buffs to explore more classic works, as it has added 37 titles to its online video-on-demand service (youtube.com/user/KoreanFilm).

Eight films including Im Kwon-taek's 1993 box office hit "Seopyeonje", about "pansori" (Korean opera) singers, is being shown for free through the website through Dec. 31.

A total of 27 of his works, including his 1958 debut "All About Marriage", are on offer through Dec. 31. Admission is free of charge.

"Archive spotlights '60s literary films"
by HanCinema is licensed under a Creative Commons Attribution-Share Alike 3.0 Unported License.
Based on a work from this source