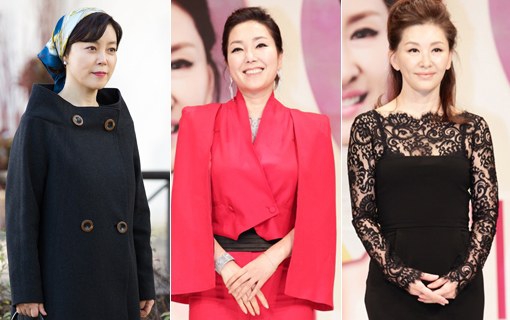 Pretty women are taking over the drama world.

Lee Mi-sook in the MBC drama "Miss Korea", Lee Hwi-hyang in "Shining Romance" and Choi Hwa-jung from the SBS drama "Kind Words" are some of them. They are in their 50's as they were born in the 1960's but they don't look and feel that old. They are either top stars, wealthy women or strongly characterized women in the dramas.

Lee Mi-sook has charisma written all over her. She stars as the owner of her own salon in the drama "Miss Korea". She overwhelms her opponent with her sharp eyes and cold voice. She's been proving her existence in the recent dramas, "Lee Soon-sin is the Best", "A Thousand Days' Promise", "Smile, Mom" and now "Miss Korea".

Lee Hwi-hyang from "Shining Romance" is going back and forth any character she likes. In the day, she's a quiet woman but at night she's a sensual woman with a secretive side. She's been showing the most powerful image so far compared to all her other work and her hair, make-up and outfit shows a lot of effort. She wears mini dresses that show her whole back, shirts with their buttons down and other striking outfits.

Choi Hwa-jung acts as a cheerful woman who just got divorced. She got married to a foreigner but is now back in Korea as a cooking class instructor. She's very smart in reality and this trait of hers brings life into her character. Her fashion can't be compared with anyone else's and she's drawn the attention of viewers with her lipstick, outfit and hair.

Currently more active than the 20's, these actresses are showing that they are staying strong a healthy with continuous effort and self-investments. Younger actresses should keep that in mind, according to various people in the biz.

"Are women in their 50's are hotter than the 20's?"
by HanCinema is licensed under a Creative Commons Attribution-Share Alike 3.0 Unported License.
Based on a work from this source