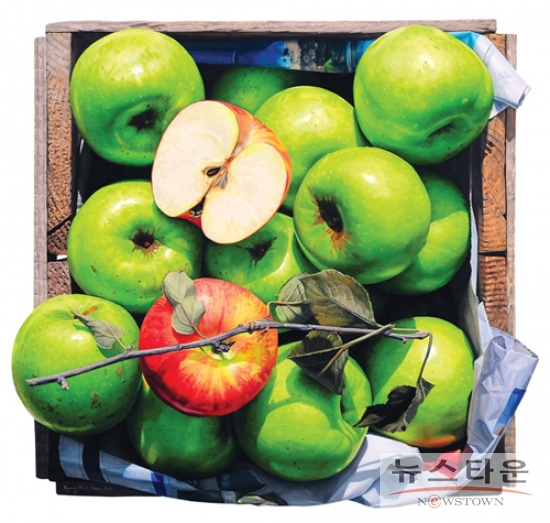 It's the beginning of the week once again and we have our arts and culture reporter Michelle Kim to give us an update on the latest art and culture news.
Hello Michelle.
How was your weekend ?

[Reporter : Michelle Kim] Hello Conn-young.
I had a very exciting yet relaxing weekend.
I actually went to Busan over the weekend and had some amazing seafood, drove across the famous Gwang-Ahn bridge and got lots of rest.

Sounds like you had a lot of fun. Well, so what do you have for us today

[Reporter : ] Well, to start the week off, I have an exhibition showing some delicious foods.
Here are the details.

[Interview : ] "It makes me hungry. I would like to taste it right now. It is very lifelike and simply amazing".

60 Korean and foreign contemporary artists have produced artworks depicting 100 different dishes.
This method of extreme realism seemingly affects the palate as well as the olfactory senses through the sense of vision alone.
The exhibition 'tasty land' promises to be a true feast for the senses.

[Reporter : ] The exhibition, "Tasty Land" will be held at the Yangpyeong Art Museum until April 22nd.

You're right. I'm getting hungry just by looking at some of the photographs.
The bibimbap, especially, looks amazing.

[Reporter : ] I feel like I can smell the kimchi from here. I'm definitely going to grab something to eat after this.

Me too. Well what else do you have for us today

[Reporter : ] Moving on, I have good news for the ballet fans who have dreamt of watching their favorite ballet performance at home.

The Bolshoi Theatre is taking to the worldwide web.
Audiences from around the world will now have the opportunity to view the Ballet performances of the Bolshoi Theatre through YouTube videos.
The viewing will be free of charge. Though the experience may not be as vivid as watching the performances at the theatre, first-hand, there may be other perks to look forward to.

Dancers also agree that this makes for a great opportunity to allow more people access to performances.

[Interview : ] "I remember when I was little, during Soviet times, they often showed ballet .
Now of course, it's begun again - the culture channel shows us opera and ballet shows - but you'd like to see more of it because not everyone can come to the Bolshoi Theatre or to another theatre".

The Bolshoi Company aired its first live performance, from many others to come, on March 11, 2012 via YouTube.

[Reporter : ] Ballet performances don't really happen frequently, so this YouTube viewing of the performances of the world famous Bolshoi Theater seems like a great way to get more people to enjoy the elegant and graceful performance art.

I agree. I'm sure this will get more people to open their eyes towards ballet performances and appreciate them even more.

And I believe you have the events bulletin for us now[Reporter : ] Yes I do.
I have a performance, a movie, and an exhibition for you.
Check this out.

A unique performance that is a mix of pansori and comic crime thriller will be showing at the Seoul Namsan Traditional Theater from April 6th to the 8th.
This comic variety pansori performance called "But:too" will break all stereotypes of Pansori being slow and traditional.

Director Kim Joong-hyeon's film "Choked" is headed to the Miami International Film Festival and the 36th Hong Kong Film Festival.
The movie will be released at CGV Daehangno on Thursday.

Western painter Lee Hae-jeon will be hosting a private exhibition from the 21st through the 27th of this month at the Insa Art Gallery in Gwanhundong.
Her exhibition will be about the feeling of vitality mainly influenced by the informel movement in Paris after World War II.

Thank you for the update and I will see you tomorrow.

[Reporter : ] Thank you and thank you all for tuning in.