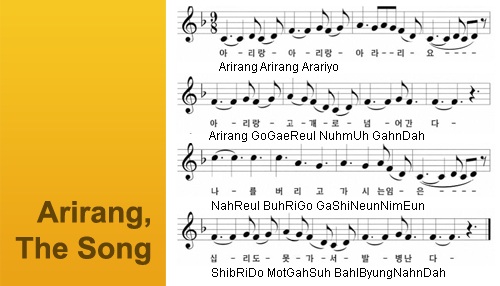 It's Friday afternoon and I'm sure many of you, AND MYSELF, are excited for the weekend to begin once again.
The rainy clouds are expected to veer away for the next three days so, rather than staying at home why not enjoy outdoors

[Reporter : Michelle Kim] Hello Conn-young. Let me begin by asking this question: What comes to mind when you think of the term, "Arirang" For me, our "Arirang" station, of course --- AND, as a Korean Korea's long-time favorite song Arirang. I know the melody has been encapturing the ears of many around the world.

[Reporter : ] Yes, the term Arirang has been used for many, many different songs, products, movies, books, and more in Korea.
To take a closer look at how influential the song "Arirang" was and how the term was used, check out this exhibition.

The tune, "Arirang", may possibly become a candidate for the UNESCO Masterpieces of the Oral and Intangible Heritage of Humanity.
There will be an exhibition that draws attention to the history and the value of Arirang, which represents the life of the Korean race.

Grandmother Hoon was a victim of sexual slavery by the Japanese military during the World War II.
She was taken to Cambodia and lived there for the rest of her life.
Although she had forgotten the Korean language, she vividly remembered the tune of Arirang.

The term, "Arirang" has a special place in the lives of Koreans.

The first filtered cigarettes in Korea were named Arirang which took the shleves in 1958.

"Arirang, the first Korean filtered cigarettes were sold in Korea from July 20th"

Not only has the term "Arirang" been used in movies, books, concerts, as well as the symbol of resistance during the period of Japanese colonialism but also has been used as a national cheer song.

From food to karaoke machines to daily items "Arirang" is not just an ordinary song.

[Interview : Lee Kun-wook, Art and Culture researcher National Folk Museum] "American jazz artist Oscar Pettiford came to Korea and heard the Arirang melody. He then arranged the song into a more jazzy tune, and named it "Ah-Dee-Dong Blues".
The exhibition will show 2000 references such as videos and sound sources that take a deeper look at Arirang, the Korean's melody.

Reporter : ed:paul] The exhibition will be held at the National Folk Museum until May 21st.
And even though you are familiar to the song and the term "Arirang", it's hard to pinpoint where and how it may have been used.
So I think this will be a great opportunity to take a look at how the term is embedded in our lives.

I feel like this exhibition will be very touching.
As a Korean, the word "Arirang" itself just stirs up the love for our country inside me and I think that's the case for many of us.
And also for the foreigners and tourists visiting the country, I hope it will provide a peek into the Korean culture, people, and society all embraced in this beautiful tune.

[Reporter : ] Most definitely so. But, you know what else might interest those tourists to the country -- an international film festival kicking off right here at home.
If the Busan Film Festival comes to mind, think again -- it may not have as long a history as BIFF, but it's JUST as artistic and entertaining -- the Jeonju International Film Festival.

The 13th annual Jeon-ju International Film Festival will be opening on the 26th of this month.

The film, "Sister" will cut the tape, and "Simple Life" will mark the grand finale.
Including these two movies, there will be 84 movies that will be showing at the festival and competing against one other.

"Sister" portrays the hard life of a sibling in a very composed manner.

The film by a half-French, half-Swiss director, Ursula Meier is praised by many critics as an astounding piece and has won an award at the Berlin International Film Festival.

Jeonju International Film Festival will also show 80 films made by directors from 42 different countries, including the Digital Project 2012 - three short films directed by Ying Liang from China and Raya Martin from the Philippines.

[Interview : Yoon Un-sung, Programmer Jeonju International Film Festival] "The International Competition allowed many rookie directors' movies to be screened. I am pleased that the independent movie directors and their movies can all watch each other's movies together".

The 13th annual Jeonju International Film Festival will show movies that will attract both artistic and commercial world and allow the audience to empathize and appreciate the films.

It sounds like a lot of great movies with a wide range of genres will be available for the viewers. So how do you go see this festival[Reporter : ] If you go to the Festival's website, www.jiff.or.kr, there will be guidelines on how to buy admission tickets for each day of the festival. The ticket prices range from it being free to 10,000 won so go check it out.

Great! and now you have the events bulletin for us[Reporter : ] Yes I do. I have two musicals and a concert that you may want to go see over the weekend. Take a look

The musical "Moby Dick" will be showing at the Doosan Art Center Yonkang Hall until April 29th. This musical as been nominated in 5 different categories at the 2011 Korean Musical Awards and has won an award in the Stage Art category.

The original musical Unrequited Love will held at the Naksan Theater at Daehakno. It will be an open run musical about four love stories that will make people laugh and also touch people's hearts.

The singer MSTREET will be holding a concert at the Music Monster Hall in Daehakno until April 30th. They are famous for their unique voices and heart-warming harmony. The Balla Show is set to help englighten the lost sensitivity and sensibility.