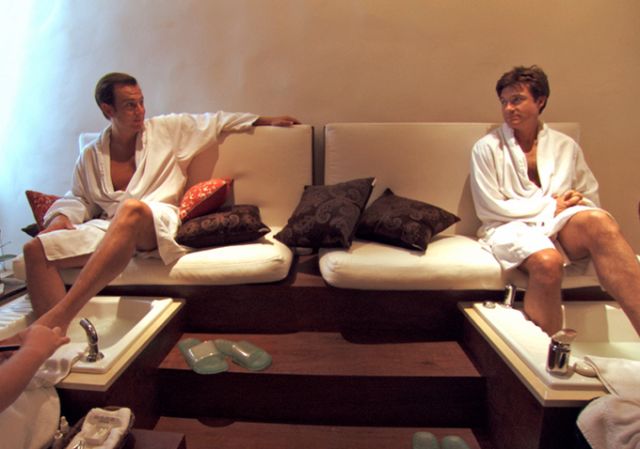 It's Friday and it's the end of another week so, of course, our Michelle Kim is here to help us keep busy this weekend. Instead of work, chores, and homework, our Michelle brings us the latest on fun and entertaining art and culture events.

[Reporter : ] When you're physically injured, you go see the doctor, but if you're emotionally injured where can you go to fix it"Letters to Father Jacob" tells the story of a blind priest, a mailman and the murderer who takes on the job of reading the bride's letters.

The film portrays the communication and consolation between the priest, who sees the world with his heart, and the murderer to lives a reclusive life.

The three characters convey the message of loneliness, communication, and consolation.

The film 'Like Dandelion Dust' is about two couples, one who made the mistake of giving their baby up for adoption, and another who adopts that baby. One lives in grief and sorrow, while the other lives their lives filled with love and happiness.

The story progresses as the two couples, living such different lives, meet and deal with their conflicts, which later on, conveys the message on the importance of family.

Another film to heal your soul is the animation, "Colorful'. The character in the film gets a second chance in life after his suicide.
It's tough for him to live inside a middle schooler's body for 6th months.

This film shows the harsh reality of teenage suicide, bullying, and statutory rape and how the main character realizes the importance and hopefulness of life.

[Interview : Sim Young-seop, Movie Critic] "Healing Movies allow us to look back at their lives and also search for the better 'me' inside ourselves. The movie is also very emotional and touching".

The three movies will be conveying their warm messages in local theaters soon.

[Reporter : ] The three movies have all been released and are in theaters for you to go see.

Sometimes you just need to look at another person's life to think about how you're living and learn from their worries, mistakes, and solutions. I could definitely use some alone time to watch these films and think back about my life, and find solutions to my worries.

[Reporter : ] Yes definitely. We live in such a busy world that it's hard to find comfort and serenity these days. Even with media, it seems like everything is so dramatic and overexaggerated, so I think it's great to have films and even animations that just talk about the real world we live in.

Definitely. I will definitely watch at least one of the films this weekend. And moving on, you have more events for us

[Reporter : ] I have another documentary film called "Mansome" that talks about the modern masculinity and the superficiality of beauty. Most of us may think that only women take hours and hours to take care of our physical appearances, but wait til you see this.

The word, "Mansome" will be taking over the term handsome very soon. Director Morgan Spurlock's latest documentary questions modern masculinity, as it shows the viewers the world of modern male grooming.

[Interview : Morgan Spurlock, Director] "All things that have happened to women for decades are now happening to men. 'You're too fat, you're not good enough, lose weight, this will make you better, your skin's not good, you're ugly', like all those things that have been on magazines are now being told to men. These products are now being catered to them and it's a multi-billion dollar business and men are relying on them to look better and feel better".

The story shows the grooming life of Jack Passion, who is a two-time World Beard and Moustache champion.

He is obsessed with keeping his flaming red moustache in perfect conditions.

[Interview : Jack Passion, Champion Beardsman] "It takes me a while to get ready in the morning; I have to sleep with it braided for obvious reasons. When I wake up it's all crimped and everything. With a beard like this, people are waiting for it to look bad".

Along with Passion, other unique and distinct characters share their beauty fears and secrets.

I mean, I knew men were developing more interest in grooming but wow, I had no idea it was up to this level!

[Reporter : ] I know, I think we definitely underestimated the agony that goes into grooming for men. The back waxing looked absolutely painful. This documentary also points why men started to obsess about grooming as well. We live in a very superificial world and I think the documentary makes a statement on that.

Well, I hope we will be able to see this in Korea very soon. And now, you have the events bulleting for us[Reporter : ] Yes I do as always. I have details on the musical, "Sherlock Holmes", a concert by acapella group Sweet Sorrow, and another concert by singer Yi Sung Yol. Here are the details on this one.

The musical, 'Sherlock Holmes-Secret of the Anderson Family' will be showing at the Sookmyung Art Center Theater S in Seoul through this Sunday and go on a tour around Korea. This musical won three awards at the 17th Korean Musical Awards, including Best musical, Best compostion, and best script.

Acapella singing group Sweet Sorrow will be holding their concert at the Olympic Park 88 lake waterside stage from June 30th to July 1st. The group debuted in 2005 with the album 'Sweet Sorrow' and have participated in the famous comedy t.v. show 'Infinite Challenge'.

Singer Yi Sung Yol will be holding a concert from July 11th to the 14th at the Olympic Hall Muse Live. He debuted in 1994 with the album "Nothing's Good Enough' and won the award for Best Modern Rock at the 9th Korean Music Awards.

Thank you for the update, have a great weekend

[Reporter : ] My pleasure, have a great weekend.