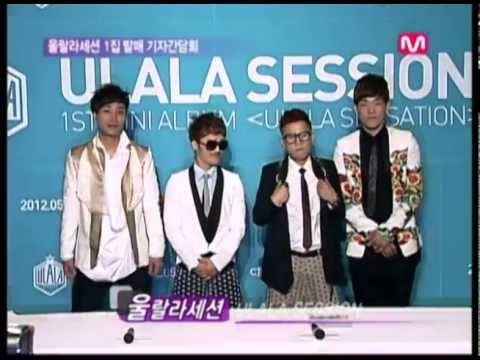 It is Wednesday and you know what that means...it's celebrity news time. I hear that our Michelle Kim has brought us the latest updates in Hollywood and the Korean music scene.

What do you have for us today ?

[Reporter : ] Super Star K 3's winning team Ulala Session's debut album has hit number on the charts as soon as it was released. The runner up of this audition program, Busker Busker is also receiving rave reviews with both the critics and the fans. Here are more details on the increasing popularity of singers debuting from audition programs.

Ulala Session's debut song, "Beautiful Night" almost seems like a musical, with entertainment for the ears and the eyes.

The song debuted in number one on numerous music charts in Korea and garnered much attention.

[Interview : Park Seung-il, Member of Ulala Session] "You can compare our album to rice. Our album doesn't stick to just one style or color, but tries to satisfy the tastes of all music lovers".

Runners up in the TV talent show Super Star K3 Busker Busker's debut album has also been a huge success with their acoustic sound and honest yet romantic lyrics.

The band's concerts in 5 different cities, including Seoul, sold out quickly so they are looking into holding another encore concert in the future.

Im Yoon-Taek, leader
[Interview : Im Yun-taek, Leader of Ulala Session] "To be quite honest, I am very jealous, really jealous that they are doing so well. We talked amongst each other and realized that Busker Busker needs to succeed in order for us to do so as well".

Despite their sudden fame and success, there are some that claim that singers who achieve fame from audition programs have to go through obstacles that regular singers don't have to.

They say that because they were never trained, it is hard for them to compete with heavily trained superstars that are brought through the ranks of Korea's entertainment industry.

However, as more and more TV channels are producing audition programs, the popularity and interest in these singers is reaching its peak.
Industry insiders are even saying that these singers may even change the entire music business as a whole.

I loved watching the third season of Super Star K especially because everyone was just so talented. I was a fan of Ulala Session so I'm glad that their album is doing well.

[Reporter : ] I was a huge fan of this show as well and as a fan of Busker Busker, I'm just glad that the all of the groups that were on top 3 on the show are doing very well and I hope that the critics are wrong and that the talented people and groups from audition programs will have a long and steady music career

I hope so as well. And moving on what do you have for us

[Reporter : ] I have the latest updates from Hollywood. From Jay-Z organizing a music festival to the Cannes film festival, I have it all so take a look at this.

Hip-hop artist and producer Jay-Z is organizing a special two-day music festival that will take place on September 1st and the 2nd.

The event will consist of 30 performances around the world. The line-up won't be revealed until May 21st and the tickets will be go on sale the very next day on the 22nd.

X Factor has revealed the final judge for the American version of the audition show. Along with Simon Cowell and Britney Spears, 19-year-old Demi Lovato has signed a 15 million dollar contract and will be joining the judging panel to find the next big artist. Although she has a summer tour planned, sources say that the tour will not conflict with her X Factor duties.

Cannes is preparing for its 65th annual film festival as workers put the finishing touches on the premiere and party spaces for the movie-world's A-listers.

Marilyn Monroe is set to be the icon of the 2012 festival, in memory of the 50th year anniversary of her passing.

Fans are already getting ready for the big night as they secure their viewing spots.

[Interview : Isabella Poulain De La Fontaine, Cannes Film Festival fan] "We're keeping a space to take the best pictures possible on Wednesday night, the big day of the opening of the Cannes film festival. You have to be at the right place to take good pictures this is why we came early. But you must be so patient!"

The opening film is the world premiere of Wes Anderson's children's fantasy "Moonrise Kingdom" on the 16th and the festival will run until the 27th of May.

[Reporter : ] I sure hope so. And maybe we can catch oa glimpse of their daughter Blue Ivy Carter. And of course the Cannes film festival will be filled with A-listers from all around the world, including Brad Pitt and Angeline Jolie, Sean Penn and Nicole Kidman, and also director Im Sang-soo from Korea will be joining the stars as his film Taste of Money was nominated for the competition part of the festival.

We have a lot to look forward to! I hope we will be hearing good news from the Cannes Film Festival on director Im Sang-soo's movie. And now you have the events bulletin for us[Reporter : ] Yes I do. I have the musical Hairspray with actor Gong Hyung-jin playing the role of Edna, singer Sung Si-kyung's concert at Yosei University, and the musical La Cage aux Folles coming to Korea. Take a look.

The musical Hairspray will be showing at the Chungmu Art Hall from June 13th to August 5th. The role of Edna, Tracy's mother, who was played by John Travolta in the movie, will be played by the famous actor, Gong Hyung-jin.

Singer Sung Si-kyung will be holding a concert on May 26th and the 27th at the Yonsei University Open-air Theater. The concert will also offer special events for those who are planning on getting married between May 1st until the 20th. The dress code for this concert will be semi-formal.

Musical La Cage aux Folles will be showing at the LG Art Center from July 4th until September 4th. This is the only musical to win the Tony Awards' Best Musical and Revival of a Musical three times