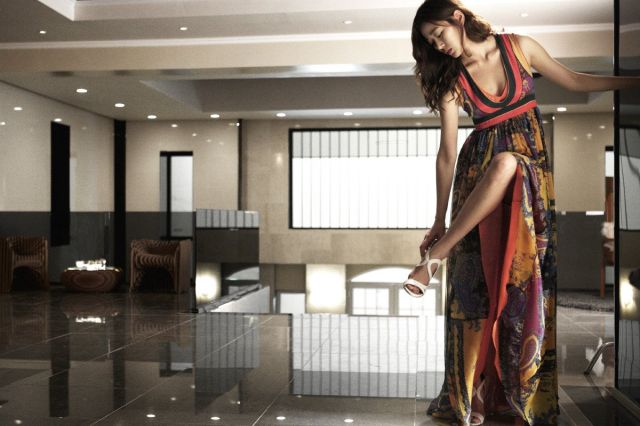 It's Thursday and we're back with our Michelle Kim to give us the latest updates on the arts and culture scene. From furnitures to the newest Korean movies, she has it all for us today.

So, what do you have for us today ?

[Reporter : ] Korea will be celebrating the 100th year anniversary of the master of Scandinavian furniture and the virtuoso of Danish chairs, Finn Juhl's birth by holding an exhibition. I hear that even the Prince and Princess of Denmark visited this exhibition when they were in Korea to visit the Yeosu Expo. Take a look at this.

The most famous furniture piece made by Finn Juhl was the pelican chair.
The chair got its name due to its design that looks similar to the beak of a pelican.

The back of the chair seems to wrap around the body of anyone who sits on it with its wide, curvy design.

Easy Chair no. 45 is called the mother of all chairs and Frederick the 9th loved the chieftain chair, which mixes leather and wood for comfort and sophistication.

Since Finn Juhl was an architect, his furniture was kept simple yet sturdy with a secure frame.

The back or the sheet of the chair may be slightly disconnected with the frame for a more fun design, along with the elegant yet bright vivid colors.

These stylistic innovations make it really hard to draw the line between just furniture and art.

[Interview : Peter Hanson, Denmark Ambassador] "And I think the exhibition here today shows why Danish furniture is famous. It's very simple, it has a very clean design, and it's very functional".

[Reporter : ] The furniture exhibition celebrating the 100th anniversary of Finn Juhl will be held at the Daelim Museum until September 23rd.

Just by taking a glimpse of the furnitures in the video, I already found a couple pieces that I like. The pink couch is absolutely gorgeous and I would really like that in my house..

[Reporter : ] These furnitures satisfy both the aesthetic appeal and comfort so it's probably a perfect choice for you and for anyone who wants to re-furnish their current home or furnish their new homes.

Sounds like a plan. And moving on, what else do you have for us

[Reporter : ] The Cannes Film Festival just had its opening ceremony today and two of our Korean movies that were invited to the Cannes festival will also be released in theaters in Korea at the same time. Take a look.

The Cannes Film Festival has begun. And Koreans are more interested in this year's festival than at any other time because 5 Korean movies were nominated to compete against films from all over the world.

For the competition section of the festival, director Im Sang-soo's "The Taste of Money" and Hong Sang-soo's "In Another Country" will be competing for an award against 20 other films.

These two movies will also be hitting theaters in Korea as well.

The film, "The Taste of Money" tells the story of a rich addict. The power struggle, obsession, greed, and the lust for money is portrayed through the characters twisted relationships.

Director Hong Sang-soo's "In Another Country" is about three women who stay at a pension by the beach for their vacation.

The movie has also gained much attention due to the casting of famous French actress, Isabelle Huppert .

Hopefully the two movies will not only be smashes at the box office but also bring back good news from the Cannes, along with the 3 other Korean films that were invited to screen that the Festival.

[Reporter : ] We mentioned the film "The Taste of Money" briefly yesterday when I were talking about the Cannes Film Festival and I know that you are so excited to watch this. The storyline seems to be very well-structured and the actors and actresses are very talented so I don't think this movie can go wrong.

Exactly. From what I know, the film will be out in theaters today so hopefully I can catch this in theaters this weekend! And now you have more events with the events bulletin for us[Reporter : ] I sure do. This is a reminder for all of the people who have not yet bought tickets to singer songwriter Wouter Hamel , Bobby Kim, and Yoon Sang. Take a look for more details.

Claimed to be the next pop jazz superstar, singer songwriter Wouter Hamel will be holding a concert on June 20th at the Hongdae V Hall. He has released three albums and one special album so far and will also participate in the Seoul Jazz Festival this year.

Singer Bobby Kim will be holding his "Love Chapter 2" concert at the Doosan Art Center Yonkang Hall from June 28th to July 1st. Known as the Godfather of Soul, his hit songs include, "Let me say goodbye", A Whale's Dream", "That thing called love" and more.

Singer songwriter Yoon Sang will also be holding his first solo concert in three years at the Coex 3rd Floor Auditorium on June 2nd and the 3rd. Fans with disabilities will be given a 50% percent discount.