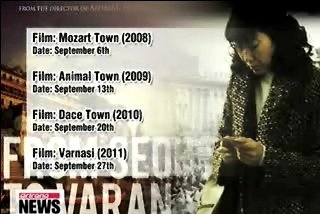 And now it's time for our daily arts and culture update with Michelle Kim. Today, she begins with her continuing coverage of a Korean film series in London highlighting a different director each month, so let's go to her for more.

So what's happening in London

[Reporter : ] Last week I told you about "The Year of The 12 Directors" project that is being held throughout the year in London. For the month of September, the series focuses on the films of director Jeon Kyu-hwan. His films are not widely known, but have received attention at international festivals, so this will be a chance for people to get to know another great, yet under-recognized, Korean director.

Director Jeon Kyu-hwan's films may not have been created for a commercial audience, but they have garnered critical acclaim in Korea and on the festival circuit. His films are highly realistic, with a message that echoes the famous words of Charlie Chaplin: "Life is a tragedy when seen in close-up, but a comedy in long-shot".

Jeon is perhaps most famous for his "Town Trilogy" -- which includes "Mozart Town", "Animal Town" and "Dance Town".
All of the films in this series focus on society's underdogs From migrant workers to social misfits and North Korean defectors, the trilogy portrays a part of society that most people want to forget.

It certainly wasn't easy to put such realistic situations on film, nor is it comfortable to watch. Jeon gives us scenes we'd rather not see, such as an employer's brutal treatment of his employees, customers who belittle workers, and women dealing with the animalistic behavior of men.

But the films also attempt to show that none of these problems will be solved if no one takes notice.
Jeon's films walk the line between documentary and drama and contain rich visual imagery and moving performances.
His films will be shown at the British Film Institute starting with "Mozart Town" on Septebmer 6th and ending with "Varanasi" on September 27th.

It sounds like Jeon is more famous on the international film festival circuit and less well known among domestic audiences. Could you tell us more about him[Reporter : ] I sure can. Jeon Kyu-hwan debuted as a director in 2008 with "Mozart Town", which is the first film in his "Town Trilogy". He has said that art should not ignore social taboos, but instead bring these issues to the surface.

This may be one of the reasons why his works haven't been as popular here, but why international critics are interested in them.

Sounds like an interesting film series. And now to wrap things up, you have the events bulletin for us[Reporter : ] Yes I do. I have a very "delicious" musical for you called "Bibap", a concert in August by Jamiroquai, and another concert by the lead singer of the Korean singing group 4Men that will take place in September. Here's the events bulletin for more details.

It's perhaps the most delicious show ever The musical "Bibap" continues its open run at the Cinecore Bibap Theater in Seoul with a spicy mix of music, dance and cooking.

Jamiroquai, often tabbed as one of the most stylish bands in the world, performs in Seoul on August 22nd at the Jamsil Indoor Stadium. Songs like "Virtual Insanity" and "Cosmic Girl" have the band's trademark mix of funk and jazz, making them a hit in the U.S., Europe and Asia.

The lead singer of the group 4Men, Shin Yong-jae will be holding his first concert at the Performing Arts Center at Dongduk Women's College from September 13th to the 16th. Shin gained fame after singing the theme song to the hit TV drama "Secret Garden" and for appearing on the TV show "Immortal Song".