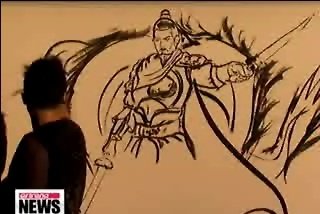 And now it's time for our daily arts and culture update with our Michelle Kim. I hear she went to see a performance yesterday that was an exciting mix of dance, music and drawing,.. so let's turn to her now for more.

So, tell us where you went.

[Reporter : ] Well, I went to Myungbo Art Hall yesterday to see a fantastic show by four performers, all very talented in dancing, acting and drawing. These multi-talented men had the audience up on stage and interacting with the performers throughout the show, which made for a very enjoyable evening. Take a look at this.

It's a special performance that fuses dance, music and drawing while also inviting the audience to join in the fun.
The production, "Drawing Show: Hero", at Myungbo Art Hall features 4 multi-talented performers who portray heroes from cartoons, music and films while showing off their artistic skills to create beautiful drawings and paintings that are displayed throughout the production. In the process, they use art techniques such as spin drawing, dust drawing, speed drawing, marbling and cube art. The show has been in an open run since 2010.

[Reporter : ] "'Drawing Show: Hero' captures the audience's attention for the whole 80 minutes thanks to a variety of art techniques, fast and upbeat music, and comedic performances. This non-verbal show of continuous dance, acting and drawing is enjoyable, not just for Korean audiences but for non-Koreans as well".

[Interview : Cho Woo-suk, Producer and Performer ] "The show captures the joy of watching a drawing being made, but we also interact with the audience continuously and it's much more fun if audiences come to the show with an open mind".

Drawing Show: Hero is in an open run at Myungbo Art Hall in Chungmuro, central Seoul.

It looks like a really fun performance! With all the drawings and paintings and dancingit must have been an exciting time. What did you think about it[Reporter : ] Well, I really had a great time and it was just very nice to see the performers interacting with the audience. You know, you never really get to see the process of how unique drawings like these are made, so that was very interesting to watch. I should also say that there were a lot of tourists at the show, but because it is a non-verbal performance, no one seemed to have problems understanding the plot or engaging with the performers.

This sounds like a great performance for children and adults alike. And after watching the video, I have to say the drawings look amazing and I can't believe they drew them in a matter of minutes. It seems like a show well worth watching. And now to wrap things up, you have the events bulletin for us, right[Reporter : ] Yes, I do. There's a music festival that promotes the idea that music can heal the mind, a concert from a completely different genre,.. hip-hop,.. that features some of the greatest hip-hop artists in Korea. And finally, I'll tell you about a concert by the ballad duo Vibe in October. Here are the details.

The Healing Music Festival on Jeju Island, now in its fourth year, is a three-day festival featuring performances by 14 groups in a range of genres from new age to pop and aims to promote the idea of music as an element in healing.

Freestyle Day 2012 is a hip-hop concert with rap battles and performances by some of the nation's best hip-hop artists, including Dynamic Duo, Simon Dominic, Beenzino, San-E, Dokki and more. The show will be held on September 9th at Ax-Korea.

The duo Vibe will tour Korea in celebration of their 10th anniversary. With four studio albums to its name, the duo is known for its romantic ballads. The duo wraps the tour in Seoul at Kyung Hee University's Grand Peace Hall on the 6th and 7th of October.

Thank you for the update and we'll see you tomorrow for more arts and culture updates.