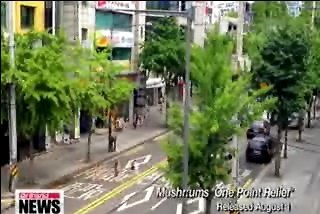 It's Monday and it's the start of a new week and we have our Michelle Kim here with us to give us our daily arts and culture updates.

[Reporter : ] I have two exhibitions for you today. One is a photo exhibition tracing a group of whales through waters off of New Zealand; in the other, Korean artists parody classic works of art from around the world. Take a look.

Most photographers capture their subjects on land, but photographer Chang Nam-won had to go underwater to capture his.
Chang spent five years underwater documenting the lives of a group of humpback whales living around Vava'u Island, located 1,900 km from New Zealand. His photographs of these gentle giants are now on display at ____ in Seoul. The whales, which weigh more than 30 tons, are very sensitive to sound, so Chang needed to be extra fast when pressing the shutter button. But despite this and other challenges, Chang said that whenever he locked eyes with the whales, he felt as if he had the whole world in his hands.

[Interview : Chang Nam-won, Photographer] "I felt a sense of connection with the whales, we met underwater and just kept each other company".

There is another series of unlikely figures at Gallery Santorini in Seoul. Marilyn Monroe makes an appearance in Shin Yoon-bok's "Samchugayeon", which is about prostitution during the Joseon Dynasty. In another painting, Leonardo Da Vinci's Mona Lisa is wowed by a flying plane. For the exhibition "A Matter of Time", a group of Korean artists recreates iconic works by major figures in art, from Andy Warhol to Da Vinci to Millet and Van Gogh. The exhibition aims to reinterpret classic works of art for a modern audience and promote understanding.

[Interview : Roh Kyung-hee, Curator Gallery Santorini, Seoul] " it would be nice to see a masterpiece that is seemingly hard to relate to,.. reinterpreted into a more moving story by modern artists".

Through the creativity and imagination of these young artists, viewers will be able to see both past and present and Eastern and Western cultures come together in these paintings.

It must have been a struggle to follow these whales for five years It must mean so much to the photographer to finally show his work. The exhibition looks mesmerizing.

[Reporter : ] It is,.. and it's an exhibition like no other. The photographer really made an effort to capture the lives of the whales and the photos convey the close connection that he had to these mammals. I think the images will be very moving for a lot of people. Meanwhile, the parody exhibition is much more light-hearted but I think it's something viewers will have fun with.

Well, they are both exhibitions that I would definitely want to see. And now to wrap things up, you have the events bulletin for us[Reporter : ] Yes, I do. Today's bulletin contains three events: a musical that women of all ages are sure to enjoy and two concerts. One concert is by singer-songwriter Yoon Jong-shin, who became popular through appearances on TV shows like "Radio Star", the other concert is by the lead vocalist of the group 4Men. Here are the details.

What a great start to the week with these events. Thank you for the update.