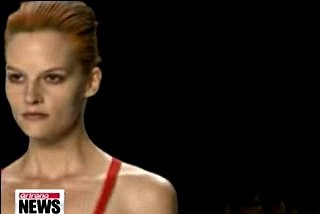 It's Wednesday andyou guessed it, it's celebrity news time with our Michelle Kim. I hear that in addition to the latest celebrity gossip from Hollywood she has a special feature on the fashion scene.

So what do you have for us today[Reporter : ] It's that time of the year again to check out the upcoming fashion trends from Mercedes-Benz Fashion Week in New York. The event, one of the world's most famous in fashion, is slated to open Thursday with a focus on light-hearted gypsy looks and styles inspired by "The Great Gatsby". Let's take a look.

Say goodbye to your bright, color-blocked clothes and your structured outfits. It's time to go back in time to the Roaring Twenties and try on a prohibition-era attitude. But if that doesn't suit your fancy, there's a more care-free gypsy look, with a touch of pink and lilac make-up.

Mercedes-Benz Fashion Week will get a touch of sass and an air of lighthearted charm when it kicks off Thursday with fashions for the upcoming spring and summer season.
The upbeat message of the event encourages women to forget about the economic difficulties plaguing the world by pampering themselves and making themselves look pretty.
Joe Zee, creative director of Elle magazine, sees a more romantic and carefree mood for Spring and Summer 2013.

The pageboy hairstyles, flapper dresses, elegant furs and saucy attitude of the Roaring Twenties that dominated the runways ahead of the fall season, will also make a statement in next year's spring and summer fashions as well.
And the minimal look, which was popular in the 90s, will make a comeback with an extra hint of fur and a bit of sparkle.
More than 100 designers will show their collections at Mercedes-Benz Fashion Week, which opens Thursday and closes a week later at Lincoln Center in New York City and other venues around the island.

I will definitely be on the look-out for some of these fashions as I update my spring and summer wardrobe It's a good thing I like carefree styles and pastel tones.

[Reporter : ] I might have to completely revamp my wardrobe for the spring and summer season because I tend to wear dark colors like black and navy. But maybe I'll feel differently when the cool breezes of spring blow in next year. In any case, I'm looking forward to trying some new looks.

Me, too, and thanks for bringing us that fashion preview. And what else have you got for us today[Reporter : ] As always on Wednesdays, I have the latest celebrity gossip for you,.. and today I'll tell you about who's hosting Saturday Night Live this season, a new star on the Hollywood Walk of Fame and the sad passing of a "gentle giant" of film. Take a look.

The 38th season of "Saturday Night Live" premieres September 15th.. with Seth MacFarland, the creator and director of "Family Guy" and "Ted", starring as the first host of the new season. The funny MacFarland is sure to be a tough act to follow, but his successors are no small-time players. Joseph Gordon-Levitt hosts the second show of the season and James Bond himself, Daniel Craig, will host the show on October 6th, to promote his new Bond film "Skyfall".

Ellen DeGeneres has played many roles in her career: talk show host, comedienne, sitcom star, and the voice of Dory from the animated film "Finding Nemo". But on Tuesday she played the role of honoree as she received the 2,477th star on the Hollywood Walk of Fame in front of an audience of fans, the media and friends Ryan Seacrest and Jimmy Kimmel. The ceremony came just a week before the start of the 10th season of "The Ellen DeGeneres Show".

The afternoon show has received six Daytime Emmy Awards for oustanding talk show and DeGeneres has won four.. for outstanding talk show host.
Lastly, the news of Michael Clarke Duncan's passing shocked and saddened Hollywood this week. The tall actor with the deep voice who was nominated for an Oscar for "The Green Mile", died on Monday, less than eight weeks after suffering a heart attack. He was 54. Two films featuring the actor are set to premiere in the coming months: "In the Hive" and "The Challenger".

Well, I hope Michael Duncan rests in peace and I wish his family and friends all the best in this difficult time.

[Reporter : ] Yes, I do, too.
Switching gears, I have one more bit of entertainment news.
The music video for Korean singer Psy's hit song "Gangnam Style" has set a record on YouTube, winning the largest number of views in the shortest amount of time for a Korean music video with 1 hundred million hits in less than two months.
Psy's growing popularity worldwide has also led the singer to sign a contract with Island Def Jam Records, a subsidiary of Universal Music. As the largest record company in the U.S., Universal is known for producing albums for some of the world's biggest pop stars, including Mariah Carey, Justin Bieber and Jennifer Lopez.

This is a major milestone for a Korean musician and I hope it gives him an edge in the notoriously competitive U.S. market.

[Reporter : ] Well, I'll continue to keep an eye on his career and will be sure to keep you in the loop with regular updates.

Sounds great. And now, you'll be wrapping things up with the events bulletin, right[Reporter : ] Yes I will, and today I have three concerts for you,.. starting with a concert by the artists from Mnet's hip-hop audition program on the 21st of this month. Then, the duo UV performs October 6th and 7th and rock star Park Wan-gyu reunites with vocalists past and present from his rock band Boo-hwal at a concert in Seoul on October 13th. Here are the details.

The contestants from Mnet's hit hip-hop audition program "Show Me the Money" will perform together at AX-Korea on September 21st. This talented group of musicians will perform all of their best songs from the show.

The singing duo UV, featuring Yoo Sae-yoon and Muzie, will be showing off their musical talents and comedic charms at a concert on the 6th and 7th of October. The concert is part of a five-city Korea tour that starts in Seoul and moves to Pusan, Gwangju and Daejeon before ending in Daegu on October 28th.

Rock star Park Wan-gyu has been wowing fans with his deep, resonant voice and powerful performances on a concert tour around Korea. The tour's finale will be held in Seoul at Kyung Hee University's Grand Peace Hall on October 13th and will feature past and present vocalists from his rock band Boo-hwal.