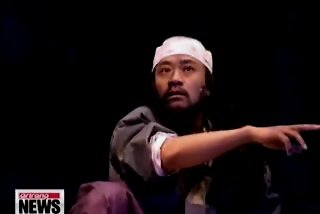 And now it's time for our arts and culture segment with Michelle Kim. Today, she'll introduce us to a performance celebrating Hangeul Day and a new movie coming soon to Korea.

So what do you have for us today[Reporter : ] Today is Hangeul Day, so I'm going to start off by introducing you to a play about King Sejong and the creation of Hangeul, the Korean alphabet. The play, a mystery-drama, puts on a lively display of Korean culture and history, with flashes of music and dance. Take a look.

The creation of the Korean alphabet is celebrated every year on Hangeul Day with festivals, writing contests and performances, and this year is no exception.
One of these events is a play called "Deep-rooted Tree" that's based on the popular SBS drama of the same name from last year.
Like the drama, the play tells the story of how Hangul was created.
The first Hangeul Day was celebrated on November 4th, 1926, which was the 4-hundred-80th anniversary of King Sejong's proclamation of Hangeul, a new alphabet for the Korean language.
In 1946, after further research,.. that date was changed to October 9th, the day we celebrate today.
The play follows Chae-yoon, who is trying to find clues about a series of unsolved murders by a suspected serial killer.
Through his search for the killer, Chae-yoon discovers the murdered individuals all have something in common -- they were all academics who were part of King Sejong's plan to create Hangeul.
The play shows the conflict between King Sejong and the conservatives who wanted to keep using Chinese characters as the alphabet for the Korean language.
Producer Lee Gi-do said that the play invites the audience to learn more about King Sejong and his leadership and how the qualities he possessed might translate to shape how we think about the upcoming presidential election.

[Interview : Lee Gi-do, Producer]
"Hangeul Day is in the month of October.[[delete this]]

[[start here]] "I hope that through the play, the audience can think about Hangeul and the Korean language once again.
Also, King Sejong is said to be Koreans' favorite ruler. So I hope that the play allows people to think about what kind of leader the country needs right now by looking back at King Sejong's life".


"Deep-rooted Tree" will be showing at the National Museum of Korea until October 31st.

This seems like the perfect way to celebrate Hangeul Day.

[Reporter : ] Exactly. The play vividly portrays King Sejong's wish to create an alphabet for the Korean people and shows the opposition he faces. It uses traditional music and costumes to really showcase Korean culture, which is why I think it's something both Koreans and non-Koreans who are interested in the Korean language and history should see.

Sounds like a very interesting play. This is a great recommendation for the month of Hangeul Day. And now moving on, what else do you have for us[Reporter : ] In his third outing as a director, Ben Affleck has teamed up with George Clooney, in a role here as a producer, and a cast of talented actors for the blockbuster action film "Argo". The film has already premiered in the U.S., and will be released here in Korea on the 31st of the month. Take a look.

The CIA thriller "Argo" had its premiere in ____ last Thursday and Ben Affleck is already winning respectable reviews from critics for his third turn as a director.
Based on real-life events, the film tells the story of a life-or-death CIA mission to rescue six American diplomats during the Iran hostage crisis of 1979.
Ben Affleck, who was at the premiere on Thursday, said he was ready to jump into the project as soon as he read the script.

[Interview : Ben Affleck, Director and actor] "This is a movie about history and today we see history repeating itself, and oftentimes in tragic ways. What I'm proud of about the movie is that this is an homage to our foreign service members, our clandestine service members who spend their time serving our country overseas, oftentimes in very, very dangerous situations".

"Argo" tells the story of how former CIA officer Tony Mendez, played by Ben Affleck, uses a risky plan to liberate six Americans taking refuge in the home of the Canadian ambassador during the Iranian revolution.
The real Mendez, who was also at the premiere, said he was overjoyed to have stars like Affleck and Clooney wanting to tell his story.

[Interview : Tony Mendez, Former CIA Officer] "No, actually George Clooney was gonna play me, but Affleck saw the script and he said 'holy moly'. So he said, 'I'll do the directing and the acting' and he did".

Along with Affleck, the film also stars Bryan Cranston, Alan Arkin and John Goodman. "Argo" will open in theaters in Korea on October 31st.

Just knowing that Ben Affleck and George Clooney worked on this film together makes me excited to see it.

[Reporter : ] That exactly how I feel too! The film has also received rave reviews from critics on the screenplay, acting and visuals. It's definitely a must-see film, not just because it's Affleck and Clooney, although for me that good enough, but also because it tells a story from recent history and I feel like everyone should recognize and appreciate what Tony Mendez did.

Definitely. I will be making my reservation as soon as possible. And now, to wrap things up, you have the events bulletin for us[Reporter : ] Yes I do. Two former lead singers of Boo-hwal will give separate concerts this month. Park Wan-gyu will perform on the 13th at Kyung Hee University and Lee Seung-chul will perform on the 20th in Suwon. Lastly, actor Park Shin-yang will give a concert to benefit his scholarship foundation on the 27th of the month. Here are the details on today's bulletin

Rock star Park Wan-gyu has been wowing fans with his deep, resonant voice and powerful performances on a concert tour around Korea. The tour's finale will be held in Seoul at Kyung Hee University's Grand Peace Hall on October 13th.

Another of Boo-hwal's lead singers, Lee Seung-chul, will be in concert at the Suwon Indoor Stadium on October 20th. After his debut in 1986 as the band's lead singer, Lee released his first album as a solo artist in 1989. Since then, he has been widely acclaimed as the "king of live performances".

Actor Park Shin-yang has invited fellow musicians and actors to join him for a charity concert benefitting his scholarship foundation, which helps aspiring young actors advance their careers. The event will take place at Ewha Womans University on October 27th.